Grounds, Gongs And Grilled At Gunpoint 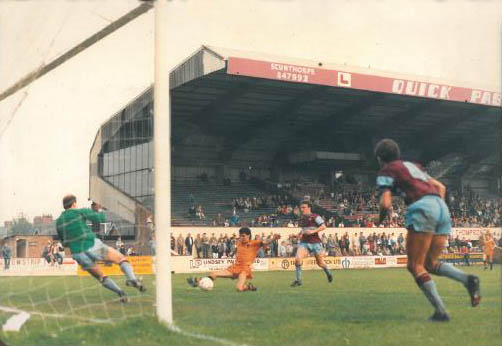 How things were…….Matt Forman scores at Scunthorpe’s Old Show Ground just before the arrival at Molineux of Graham Turner.

More than 30 years of Molineux ups and downs are set to come under the microscope in a new book by David Instone.

The Wolves Heroes co-owner will bring out the publication next season but has yet to finalise the title.

“I planned to go to press last year as a way of marking the 30th anniversary of the start of my long spell covering the club for the Express & Star,” he said.

“Then I was asked to provide much of the text for Steve Plant’s excellent They Wore The Shirt book, so I shelved my plans in order to concentrate totally on that.

“The project is now well advanced, though, and I’m absolutely loving working on it. I’ve had a few suggestions over the years that I should write a sort of memoir and know I’m very lucky. How many people are blessed to have a career that (hopefully!) others would like to read about?

“I can’t believe 30 years have flown by since I was handed the Wolves job at the Express & Star. The club and ground were unrecognisable from what they have become but anyone who was around for those title-winning days in the lower divisions and for the trips to Wembley has nothing but happy memories of them.

“They were very different days…..full of adventures and trips to tumble-down places we hadn’t seen before. I loved it and look back on that very much as ‘my’ time in as much as I had the job of reporting on it all for what was the biggest and best evening newspaper outside London.”

Instone remains a frequent match-day visitor to Wolves games as well as a regular contributor to the club’s website and programme.

But much of his work in recent years has been of a more retrospective nature – and his book will reflect that fact.

“The reigns of Graham Turner, Graham Taylor, Mark McGhee, Colin Lee and Dave Jones are the ones I regard myself as being best qualified to comment on, although I saw plenty of games under Mick McCarthy and also went to most of his press conferences,” the author added.

“I think I’m right in saying that only Phil Morgan, who did such a wonderful job of describing the halcyon days at Molineux, has covered Wolves for the Express & Star for longer than the 16 years I managed. Although we hoped to see more success from the fortunes Sir Jack ploughed in, there are an awful lot of stories to tell from that period.

“In the last decade or so, Wolves Heroes and the books I have written about the club have brought me into contact with any number of players from the past, so this will be a substantial insight.

“Not many people, players, managers or otherwise, have been able to sit down and write with some authority after being lucky enough to get to know men like Billy Wright and Bert Williams, who started out in the 1930s, and to have then seen all of the memorable Bully era.

“We are in the media are very fortunate to have privileged access at Molineux and, as well as praise and critical comment, there are any number of humorous anecdotes and some revelations that were perhaps too sensitive to use at the time but not now.

“I hope readers will appreciate that it is written with a genuine feeling for the club…..certainly, a lot of time and care are being lavished on it!” 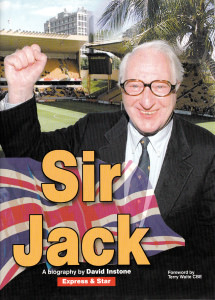 One of the by-products of a trip to the tropics…..

We provide a short extract of the introductory text here as a scene setter: “I certainly tick a few unusual boxes. I have travelled to one Division Two game on a Second World War plane, set off for home from a cup assignment in a speedboat, been on board with the players for two celebratory open-top bus tours of the town, watched the side on more than 150 grounds in the UK and overseas, hitched a lift across a border on a tractor while covering a Wolves tour, been in on the dressing-room celebrations several times and even been apprehended at gunpoint. I have managed to get myself banned from Molineux but also lunched at the homes of various managers, written a book with another, spent time with Sir Jack Hayward in the Bahamas and been to Buckingham Palace with Bully. Wonderful memories…..I couldn’t have bought those on Amazon or ebay.”