From The North East To The West Midlands…..A Popular Figure 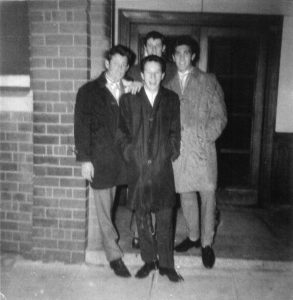 Paddy Rickerby (right) and friends in the door-way of Molineux’s main entrance five and a half decades ago. On the left is Jim Barron.

Paddy Rickerby’s name is one our keener readers might recall from several years back, probably from when it was used in close proximity to that of Jim Barron.

The two were team-mates and good mates in the north-east and stayed that way here in the West Midlands when both were signed as teenagers by Wolves.

Now we are happy to write in affectionate, albeit posthumous, tones about Paddy thanks to a chance email that has opened our eyes to the strong roots he put down in this area.

Rickerby went close to Wolves’ first team once or twice without making it but did have the satisfaction of playing for the club in an FA Youth Cup final and then on many occasions in the Central League. And the journey he made to these parts is quite a story in itself.

“Dad played alongside Jim for Northumberland District, both at school level and a bit older, and was delighted when Wolves showed an interest in him,” said his Wednesfield-based son, Dean.

“They were THE team then, probably the champions as we are talking about the late 1950s, and he thought enough of them to have a wolf head tattooed on his wrist even before they signed him.

“He left school at 14 to work in the shipyards up there but he would finish on a Friday lunchtime and Wolves paid his fare to come down on the train ready to stay in digs in Waterloo Road and play in one of the sides on the Saturday.

“He had various scouts after him, including some from Newcastle and other northern clubs like Rotherham and Leeds, plus QPR and Charlton. But, as soon as he knew Wolves were interested, that was it.

“I remember him telling me he used to spend most of every Sunday getting back to the north-east and the long journeys were just starting to become a bind when he was given terms at Molineux.”

Monday-to-Friday life among the shipbuilders wasn’t the only unusual pre-cursor to that as a professional at Molineux. Young Patrick, to give him his proper name, had broken both legs at the age of five when hit by a bus.

He had some valuable mentors on this patch, though, striking up friendships with John Harris, who would later build an extension at the house in Wednesfield in which the Rickerbys lived from 1970 to the mid-1990s, and Eddie Clamp. More memorably still, he was able to look up to Jimmy Mullen during the final months of the winger’s fabulous career.

“Jimmy was born in the Scroggs Road area of Newcastle and Dad in Walker Road, only about 300 yards away. They had a common bond,” added Dean, whose West Midlands accent is far removed from the Geordie twang we are told his father possessed.

“Apart from Jimmy Barron, others I remember him talking really fondly of when they were all growing up together at Wolves are Ken Knighton, John Galley and Peter Knowles. 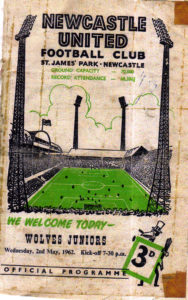 A big game in young lives….Wolves lost by the odd goal over two legs.

“Dad was very proud of the victory over Chelsea in the Youth Cup semi-final of 1961-62. He apparently couldn’t believe it when he realised they would be facing Newcastle in the final.

“His mom and dad plus quite a few a few cousins came down to Wolves for the first leg of the final and there were loads more of the family at the return. That’s probably why the two crowds were so big!

“It must have been round about that time that he had a call about playing for England under-18s but he reckoned he shouldn’t go if he wasn’t in the Wolves first team. Two or three weeks later, he was asking himself what he had done and probably regretted it for the rest of his life.

“Who knows, if there had been substitutes in those days, he might have got on for Wolves because he was part of the 12 or 13 on a couple of occasions. But he had his run-ins with Stan Cullis as well and his contract was not renewed in the summer of 1964 when he was 20.”

Jim Barron was delighted to hear of our lengthy chats with the family when we rang him this afternoon and said: “I have very happy memories of our time in football together.

“Paddy was a very steady player, as well as a good-looking lad…..a bit like Elvis! We were in digs together – for quite a bit of the time with Mrs Clamp near where Asda now is. John Galley was with us for a while as well.

“The problem was that Paddy had George Showell, Bobby Thomson and the Harrises as competition for places. It wasn’t easy to get through and we drifted apart when I went down to Chelsea for a while and he went to the club we came to know as Telford.”

Even then, the door to a full-time career in the game was not closed. Scunthorpe and possibly Leyton Orient showed an interest but Rickerby’s Kidderminster-born, Wednesbury-bred wife June, who he had married the day after his 24th birthday, wouldn’t contemplate a move close to Humberside.

It was ironic in as much as the couple were keen when an opportunity arose for him to go and play part-time in Australia and work as a labourer. The paperwork was in place and only his fear of flying stopped the move. “If I can travel by boat, I will go tomorrow,” he told would-be employers. 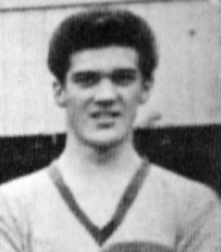 Paddy during his Wolves years.

Rickerby dropped into non-League – a good class of it, we should point out – with Wellington Town, then played for various other clubs including Upper Gornal and Manders, the latter of whom he helped win a local cup final at Molineux.

We are once more indebted at this point to Dean for the obvious interest he showed in his father’s life and career. He said: “I think he really hoped he would return to League football but I suppose it was quite attractive then to find a job and also be paid something extra for playing part-time at a decent level.

“My sister arrived in 1968 and I was born in 1972 and, from working in the shipyards in his early teens, he had a taste for doing other things if he had to. Football didn’t pay that much then.

“We were very grateful that Eddie Clamp and Jim Barron went to see him in Compton Hospice in 1994 not long before he died. It was quite funny…..my nan was there when Jim visited and she was telling him off for something or other, although the two of them hadn’t met for around 30 years!”

Paddy was only 50, a lung cancer victim. He had long given up smoking and there was a theory he had been exposed to asbestos when working in one of Tyneside’s traditional industries three and a half decades earlier.

Interestingly, he did eventually set foot on a plane when flown to Aberdeen for a labouring job with a team of workers and he lived more than long enough to see how his only son had adopted the same divided loyalties as himself, even down to his choice in body art.

“I love the Wolves and also have a big thing about Newcastle,” the former Royal Marine said. “I have a Wolves tattoo on my leg and a Newcastle badge on my back.

“Our relatives in the north-east always made a big fuss of Dad and me because there used to be a lot more girls than boys in the family and we have been seen as the ones to keep the Rickerby name going.

“Although I was born and bred down here and keep coming back to Wednesfield, I have been warmly welcomed into the Geordie culture and I joke with them that they have poisoned me with their stories about Hughie Gallacher, Jackie Milburn and Len Shackleton!

“My parents were married in the north-east because my dad’s family was much bigger than that on the side of my mom, who passed away in 2007. There has also been plenty of support for the fact we called our son ‘Shearer’.

“Names have played a bit of a part in our family story. Dad was always being asked whether he was any relation to the former Albion defender Stan Rickaby – at least until it dawned that the two spellings were different.

“They were both seen as right-backs, although Dad could also play on the left or as a centre-half. I am sure he would approve of the fact Shearer is playing at right-back now for Wolverhampton Schools at the age of 14.

“Here’s another strange thing…..Dad’s middle name was Carroll as that was his mother’s maiden name. He used to tell friends his middle name was Colin because otherwise it sounded like a feminine name until people saw it written down. 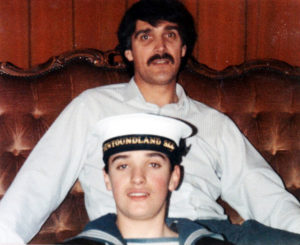 Paddy Rickerby and son Dean in about 1990.

“Our family are into delving into their past and it was my cousin, Steve, who made the first contact with Wolves Heroes over this article.

“He is a big Newcastle fan and was keen to find out more about my dad for his mother Dot. They were brother and sister – he would have been 73 now.”

One final twist to a story we have loved researching and writing…..Paddy and June are buried side by side at Bushbury – with a magpie emblem by their graves.