How Tambling Link Came Tumbling Down

Bobby Boy Was Within Wolves’ Grasp

He was Chelsea’s leading all-time scorer for nearly half a century until Frank Lampard came along in relatively recent years – and remains a true icon of ‘The Bridge.’ Charles Bamforth now lets our readers in on why and how he might well have become a Wolves player instead.

You win some, you lose some. There is not a club in this country that has not passed over a young player who went on to have a fabulous career elsewhere.

At Molineux, that list includes Alan Ball, Terry Cooper, Allan Clarke, Bobby Moncur and Cyril Knowles. But at least they got a chance to kick a ball for the club in the junior sides. 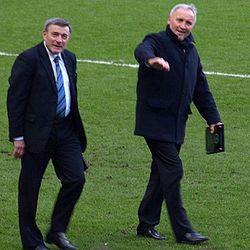 Bobby Tambling (left) and Barry Bridges during a walk-on appearance at Chelsea in 2009.

Legendary Chelsea goal scorer Bobby Tambling reveals in his autobiography, Goals in My Life, how he might well have become a Wolves player, although he never had the chance to pitch up at Molineux.

Tambling was a gifted young player in his home town of Hayling Island, near Portsmouth. He was good enough to get into the England schoolboy side in 1956-57, which is when he caught the eye of Wolves’ scouting network.

He tells how his parents did not know enough about the game to advise him, so his brothers sat in on discussions. Quickly, they realised how fickle football can be.

Bobby points out that Wolves were the biggest club in England at the time and were very keen on him, speaking at length with the Tambling family. He was suitably impressed.

Soon enough, he found himself at Home Park, Plymouth, in an England Boys side who stuffed the Republic of Ireland 9-3. A hat-trick for Tambling from centre-forward led to an urgent phone call from Wolves, urging him to come and look around prior to them sorting out a contract.

It seems he was unable to travel to Wolverhampton, though, in the week before his next game for England, this time at Wembley against Scotland.

He did not score and admits he did not play as well. The message came through from Molineux that they were no longer interested. Tambling, who was born in Storrington, West Sussex, says there was no time to mope and, in due course, he scored a brace in a 3-1 England win against Northern Ireland in Belfast.

Wolves were quickly on the phone again, saying it had all been a mistake and they did indeed want to sign him.  To quote Bobby: “(The family) agreed that this was a club to avoid.”

We can, of course, give many examples of Wolves being very much the right club for a great many young lads but here is one they let slip out of their grasp through carelessness. Tambling went on to play 370 games for Chelsea, strike 202 goals and win three full caps for England.

Reading the book makes it clear Tambling had a love affair with Stamford Bridge, so who knows whether he would have gelled in gold and black? He points out that he was part of a great youth set-up and once again he had reason to consider matters Molineux.

Bobby points out that Dickie Foss was in charge of the youngsters in West London for many years and had a huge impact on the development of the teenage element there.

However, one trophy eluded the club – the FA Youth Cup. It seems Foss saw it as the holy grail and was convinced that, with Jimmy Greaves, a legend who was already knocking the goals in at first-team level, they had a huge chance in 1957-58.

Tambling tells readers he was not involved in the campaign (which speaks of the depth in talent at the club) but that his house-mates, keeper Barry Smart and centre-forward Barry Bridges, were.

“Perhaps I would have been playing for Wolves if things had worked out differently,” Bobby says.

As every steeped-in-gold Wolves nut knows, Chelsea won the first leg of that season’s final 5-1. But as Jimmy Greaves was wont to say, “it’s a funny old game” and Wolves won the return 6-1.

The question is: would Bobby have been in Wolves’ Youth Cup side had he been on the payroll at Molineux? Although he played centre-forward for England Boys, he mostly played as a goal-scoring winger or inside-forward.

In Wolves’ team that year, as well as match-winning hero Ted Farmer, were amateur Ian Hall at no 8, Cliff Durandt at no 10 and Des Horne and Brian Perry on the wings. Hmmmm….tough competition.

Two seasons later, with a completely new side, Dickie Foss’s dream came true. Chelsea beat Preston 5-2 on aggregate, with Tambling notching a hat-trick in the second leg. Among his team-mates were Peter Bonetti, Allan Harris, Terry Venables and Bert Murray.

And thus to the other interesting overlap between Tambling, who is now aged 75, and Wolves. He reveals that his wife Kath had been a Jehovah’s Witness before they met. Ten years later, he joined the faith.

In the first game of 1964-65, a few weeks after Wolves and Chelsea had toured together in the West Indies, two strikes from Tambling and one from Terry Venables gave the visitors a 3-0 win.

Cliff Durandt….part of a talented Molineux cast in the late 1950s.

He speaks of sitting in the visitors’ dressing room at Molineux, presumably in a later season, and being told by the doorman that someone wanted to talk to him.

It was Peter Knowles, who was taking study and was seeking Tambling’s opinion. It seems Peter was told it was a personal decision.

In his book, Bobby says his religion was the closest that his private life came to be scrutinised. He says that, for 20 years, it was how he wanted to live but he developed doubts, in particular whether it was right that he should be making the call for his three children.