Backpass Back For More 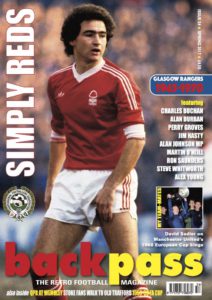 We are convinced that, if you love reading what we write on Wolves Heroes, you will also relish the contents of Backpass, the best football magazine on the market.

Throughout the publication’s nine-year life, we have been delighted to promote their articles and are happy to do so again now, having had an early skim through issue 54.

There are no direct Wolves features this time but any number of references and photos of Molineux personnel pop up and the 64 pages conjure up some wonderful memories from across the game and across five or six decades.

Among these are the match-winning contribution of early 1960s Wolves winger Mark Lazarus to QPR’s League Cup final success over Albion in 1967, a reminder that Arsenal favourite Perry Groves might well have moved to Molineux, a brief obituary of Rachael Heyhoe Flint and name checks for Peter Withe, Andy Gray and Brian Little in a long piece about Ron Saunders.

Alan Durban, resident not too far from here across the Shropshire border and a regular visitor to Wanderers games, talks fondly of Richie Barker and Alan Hinton, the latter of whom appears on a Derby goal celebration photo, and another colour picture shows Derek Dougan and Bobby Moore chatting as they walk out for the start of a Northern Ireland v England game.

Look a bit closer and you will see Danny Hegan and Ray Crawford on an Ipswich team photo from the late 1960s and David Burnside on a Plymouth equivalent.

Dave Thomas, of whom we will be writing more during the year, is another whose name crops up – in his case in a Q & A with former Leicester right-back Steve Whitworth, who is now a taxi driver. 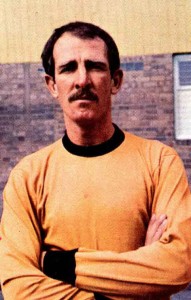 Dave Burnside – a popular figure with Plymouth, as well as with Wolves.

Backpass, which has firm roots here in the Midlands, costs £4.50 and is available from various stores but is perhaps better purchased online.

In order to do so, please click on the icon to the right that shows John Richards’ colour photograph. All the details of how to buy are included there, along with the methods of catching up with the many back copies that have been rich on Wolves content.

Issue 54 kicks off with a lengthy interview with Martin O’Neill, whose photo (from his playing days with Nottingham Forest) appears on the front as a result.