Wolves And Their Changing Manager Habits

Will we see Paul Lambert on the front of the Wolves programme again?

Recent uncertainty over the future of Paul Lambert has underlined that job security among Wolves managers is nothing like what it once was.

If the Scot leaves, Wolves will be looking for their fourth head coach of the ten-month-old Fosun era – and that doesn’t include caretaker stints by Rob Edwards.

Despite Mick McCarthy’s status as the sixth longest-serving Molineux boss of all time and Kenny Jackett’s placing of joint tenth on the same list, the club have still had seven bosses in the last ten years, including Terry Connor’s three-month spell in 2012 as successor to his gaffer and fellow Yorkshireman.

The previous ten years were marked by the presence of five men in the dug-out (Mark McGhee, Colin Lee, Dave Jones, Glenn Hoddle and McCarthy) and the ten before that saw only Graham Turner, Graham Taylor and McGhee in the role.

Such were the trials of the early 1980s that there was a high turnover in the period 1977 to 1987, with Wolves led, in turn, by Sammy Chung, John Barnwell, Ian Greaves, Graham Hawkins, Tommy Docherty, Sammy Chapman, Bill McGarry, Brian Little and Turner.

But, going back further still, we see periods of considerable stability and no little success, with only Ronnie Allen, McGarry and Chung in the job in the decade up to 1977 and just Stan Cullis, Andy Beattie and Allen entrusted with it between 1957 and 1967.

The Molineux picture no doubt reflects the national trend, with Watford preceding their last-day slaughter by Manchester City yesterday by confirming that they will continue to follow the foreign model of having a head coach in place to work with the players he is basically provided with by those elsewhere in the club. It’s hard to imagine Graham Taylor being prepared to stand for that.

Presumably, the current Vicarage Road way is the system ‘super-agent’ Jorge Mendes is familiar with from his dealings at clubs round the world, the possible sticking point at Wolves being that Lambert said on the day of his appointment and several times since that he would demand the final say on the signing of players.

In other words, he wouldn’t settle for merely working with those that had been recruited for him by others, especially those not on the club’s full-time payroll.

Notwithstanding the fact he has played and observed coaching methods abroad, Lambert is experienced and ‘British’ enough to know how it has traditionally worked here. We await developments with great interest….. 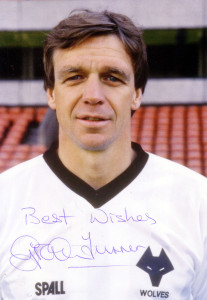 Graham Turner….had the mood of revival coursing through Wolves veins 30 years ago.

What he may not know about is this Molineux quirk – that the club have just missed out on a potentially ‘hot’ season.

If Tottenham tend to do well when the year ends in one, then Wolves usually challenge very hard when it ends in seven.

They just missed out on the First Division title in 1947, finished sixth in the top flight in 1957, won promotion from Division Two in 1967, won the Second Division in 1977, lost a Fourth Division play-off final in 1987, finished third in the second tier in 1997 and, like then, lost in the second-tier play-offs in 2007.