Rutter Rounds Up His Revellers 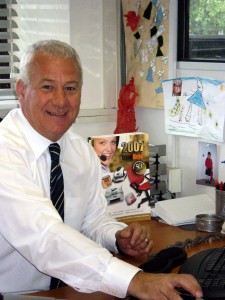 John Rutter pictured a few years before his retirement two Christmases ago.

Alan Sunderland, Steve Daley and Barry Powell have been targeted as possible guests for when one of their Molineux contemporaries reaches a landmark birthday later this year.

John Rutter captained the Wolves side who reached the FA Youth Cup semi-final in 1970-71 but, while various team-mates went on to big things at first-team level, he remained unfulfilled at Molineux and had to move on for the long senior career he enjoyed.

Sunderland, Daley and Peter Eastoe stand out as the main success stories from the squad who were under the coaching of Gordon Ecclestone and beaten over two legs at the penultimate hurdle by Arsenal.

But, as a full-back in the lower divisions with Stockport, Rutter achieved legendary status by emerging as their third highest appearance-maker of all time and becoming an inductee in their hall of fame.

As if that little lot was not enough, he even subsequently served for 20 years as commercial manager at Edgeley Park.

“I am retired now and approaching my 65th birthday in September,” Rutter said in a phone chat this weekend as a follow-up to the email asking us if he could check contact details for some of his old mates.

“I am not particularly pleased about being this old but it is a landmark to celebrate and I hope to take in a Wolves game early next season with a couple of the lads and my son and maybe have a bite to eat at the ground.

“It would seem appropriate to go back to where it all started for me in the game. It seemed more fun and less a business in those days and good friendships were formed.

“Barry Powell is a few months younger but I turned up at his 60th birthday do a few years ago and joined in with the golf at The Warwickshire not far from where he lives.

“It was nice to do something on impulse as a bit of a surprise for him and see the smile on his face.”

Rutter also plans to have smaller celebrations around Bournemouth and Exeter, two of the other League clubs he played for in his career.

On his behalf, we had hoped to speak to Alan Sunderland yesterday on the day of his former club Arsenal’s FA Cup final triumph, conscious as we were of the possibility of the Gunners or one of the news organisations inviting him over for the game. 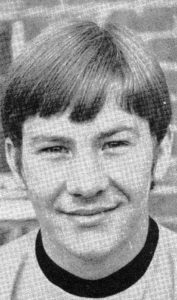 The young Molineux hopeful more than 45 years ago.

Alas, our calls to his sister’s home near Watford brought the news that the 1979 Wembley match-winner was back home in Malta and presumably watching on a big screen in a bar.

“Obviously, it is harder to catch up with Alan but we did meet up a few years ago around a Manchester United v Arsenal final,” added Rutter, whose milestone day is September 13.

“I will contact him privately and see if he has any plans to be over in England later in the year. That would be special.”