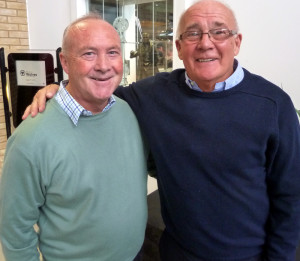 He loves a good catch-up……Ray Aggio (left) with Fred Kemp.

Wednesday, May 3: Again read with interest a feature in the Daily Mail in which Ray Aggio was seeking to make contact with friends from his youth. The former Molineux reserve wrote to the ‘missing and found’ section of the Saturday edition and hoped to be reconnected with mates from the 1957-58 Huxley Junior School football team in Edmonton, North London. Happily, he has had a good response and says: “I have already made contact with a couple of lads and been given addresses of a few more by Jeff Pinson, a researcher who does excellent work for the Mail. Pete Barnes, who was in digs with me, saw the article and I have spoken to him.”

Sunday, May 7: A winning finale to an underwhelming 2016-17 campaign with three points from Preston’s visit to Molineux this afternoon. Good to see Kevin Foley there following his release from Coventry and doing some radio work alongside Andy Thompson. Carl Ikeme was also among us on a day when many eyes and ears were on scores elsewhere with the battle for survival between Blackburn, Birmingham and Nottingham Forest.

Tuesday, May 9: Had a super time at the Player of the Year night at Telford, chauffeuring in Richard Green from the Wolves Former Players Association and finding myself sitting next to him and the BBC’s John Bray, once the Wolves correspondent of the Shropshire Star. There weren’t many ex-favourites there but Andy Thompson and his wife were also on our table, Bully made an appearance on stage with Robert Plant and we parked next to Jody Craddock. Good also to see Richard Skirrow given a presentation and a lovely on-screen tribute.

Monday, May 15: Dropped into the sports shop in Queen Street that used to be a regular destination on lunchtime strolls from the Express & Star and asked Glenn Flowers to pass my best wishes on to his dad. Sad to hear that, because of various mobility and health issues, there is no reunion planned this year of the Boys of 66, of which Ron was one. On a happier note, Glenn’s son seems to have been doing ok at Burnley, even if one of our national papers did refer to him as the grandson of former World Cup ‘goalkeeper’ Ron Flowers.

Friday, May 19: Have been looking for photos of Wolves matches against Den Haag – both in the UEFA Cup and in the 1967 USA tournament – after being asked by friends across the North Sea who are putting together some kind of football exhibition in the Dutch capital. It is, of course, 50 years since Ronnie Allen’s side squad were victorious across the Atlantic and the Wolves All Over The World book from 2015 had some appropriate and gratefully received content.

Thursday, May 25: Was gutted to realise I had just missed Alan Hinton on a visit of several days back to see his brother, Brian, and other family members in Perton. Unless I am mistaken, I still haven’t met the former England winger since the days when he wore those famous white boots to such great effect as a member of Brian Clough’s title-winning Derby team.

Monday, May 29: Expect to see bits and pieces written around here about Rajiv Van La Parra, the former Wolves winger who has today won promotion to the Premier League with Huddersfield. Here’s a fact that puts into context just how long it has been since the Terriers have been in the top flight……it was against them that John Richards scored his first League goal.

Tuesday, May 30: Ok, this is a nostalgia website but can’t help but feel saddened by some of the events of the present. The wealth of the Fosun Group offers Wolves a wonderful chance to get it right – all the more so if some stability and sensible building is achieved. Paul Lambert seemed a thoroughly decent, professional guy who stood up for his principles, though, so we wish him well.