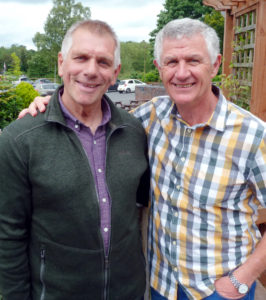 Alun Evans and Brian Thompson at The Lock pub in Wolverley, near Alun’s recent Kidderminster base.

Meeting Time, Half A Century On

They signed as Wolves apprentices on the same day, played together in the club’s reserves and knocked about socially.

But Alun Evans and Brian Thompson hadn’t met for nearly 50 years until being reunited close to their common roots by Wolves Heroes.

Football has the habit of pitching lads together and then sending them off in opposite directions, even if many possess a knack of picking up after long absences as though they have never been apart.

“I don’t think I had chance to say my goodbyes when I left Wolves for Liverpool in 1968,” Evans said. “It all happened very quickly.

“When I signed alongside Bill Shankly, I was driven up in a Jaguar by Solly Wernick, who was well known around Wolverhampton as a businessman and owned the Oasis nightclub. He was the father of the girl I was courting at the time. My dad came along as well.

“Obviously, I returned to Molineux a few weeks after signing and scored a couple of goals in a big Liverpool win. But Brian presumably had a match elsewhere that day, so our paths wouldn’t have crossed. And, by then, I was into my new way of life.

“The first place Liverpool put me into was on the third floor above a doctor’s surgery in Sefton Park. I shared a room with Emlyn Hughes and Peter Wall – and we were first-teamers!”

Evans was one of those for whom Thompson requested contact details when we reached him for interview purposes in 2015.

Both now live in Australia, although more than an hour’s flight apart, and jumped at the chance of a face-to-face catch-up when we realised both were in this country this month.

“This trip has been all about reunions for me and it’s wonderful to see Alun again,” Thompson said. “We spoke by phone a year or so ago after being put in touch by Wolves Heroes and hoped this chance would come round.

“After signing as apprentices at 15, I think we also became professionals on the same day, probably in Jack Howley’s office. Alun came through in a big way at the club and got himself that famous move to Anfield. I followed his career with interest but don’t recall ever facing him in a match, even after I moved on to Oxford, Torquay and then into non-League.

“Another time we would have been on the pitch together is in one or two of those Colours v Whites pre-season matches. They are looked back on as quite an event, although they were just another match for us. 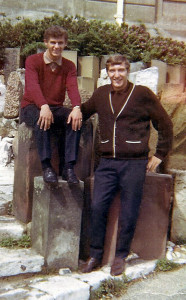 “Alun and I got along well with several other lads around our age, like Doug Griffiths, John McAlle and John Farrington, and it’s so nice to hear and read what they have since been up to in more recent decades.”

Thompson, a few months the younger of the two at 67, has had a tour of Molineux during a stay in the UK that continues for another couple of weeks before he and wife Lorraine head back to Sydney.

Evans landed here three weeks ago and departs for Melbourne again in the next day or two.