Thursday, June 1: I hope to be doing this a little less often in future but attended the unveiling of another head coach at Molineux, charged with the task of writing a ‘colour’ piece on proceedings for the club’s official website. Nuno seems an impressive character, with a more than worthy CV.

Wednesday, June 7: Had cause to ring frequent Molineux visitor Cyrille Regis and was interested to learn that he had been over in his native Caribbean this summer to attend the 100th birthday celebrations of his grandmother. And she is apparently very sprightly and still absolutely with it.

Friday, June 16: Watched the US Open from Erin Hills on TV and thought back to some of the banter at the recent They Wore The Shirt golf day at Enville. Was it Kenny Hibbitt who mentioned the WAGS at his course? That’s the Wednesday Afternoon Golf Society. Terry Wharton topped that, though, by making reference to the fact that some of his rounds are in the company of friends who, shall we say, are of senior years. They apparently call themselves The Croakers.

Monday, June 19: Have received an invitation from the widow of the late FA Youth Cup winner Les Cocker to go and view the programme collection he assembled thanks to his many visits to Molineux over the years. Nice to know that, although his first-team career for the club was restricted to a solitary game, he remained a keen fan.

Saturday, June 24: So difficult to believe and accept that it’s ten years today since Derek Dougan passed away. Memories of his funeral at St Peter’s are still crystal clear……office girls looking out of windows in the Civic Centre, nostalgic chanting in his honour from those unable to be accommodated in church and a rare appearance among us from Les Wilson, who had flown in from Canada, and Jim McCalliog – down from Scotland. It was a big turn-out in tribute to a big character.

Tuesday, June 27: Appreciated the tip-off about Jim McCalliog and his wife, Debbie, appearing this evening on the teatime Channel 4 show, Four In A Bed. Glad to say the couple came across well and won the week-long competition among three or four hoteliers or guesthouse owners. The Langside B & B in the Ayrshire town of Fenwick is their place and you wouldn’t be the first Wolves fan to drop in on them! 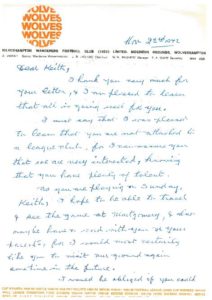 For a while, Molineux beckoned…..

Friday, June 30: Keith Beddoes isn’t a name that will resonate with too many Wolves fans but we were interested in his story and recollections. He emailed: “A few years ago, my mother was clearing her loft and found some letters on Wolves-headed notepaper from Joe Gardiner. As chief scout, he invited me to Castlecroft one Sunday in 1972 to take part in a trial match, then asked me to attend Molineux for training for a few days in December. He organised for myself and several other trialists to be accommodated at The Connaught in Tettenhall Road and said we could order what we wanted off the menu. I ate t-bone streak for the first time! We changed at Molineux, ran down to the racecourse and it was interesting seeing Derek Dougan and Mike Bailey at close quarters and learning how hard they trained. I could not believe I was with these players I had seen on TV! We went for soft drinks and food in The Wanderer public house on Molineux Street after training and I recall seeing Steve Daley and Peter Eastoe in there. At the end of the week, Joe took me to catch the train to Shrewsbury, said he knew I was going to Wrexham for trials the following week but asked me not to sign for them, as he wanted to speak to me and my father again. I did sign for Wrexham and met up with former Wolves players Mike Evans from Caersws and George Showell, who was physio and coach. But I never forgot the great experience I had at Wolves and what a gentleman Joe was.”