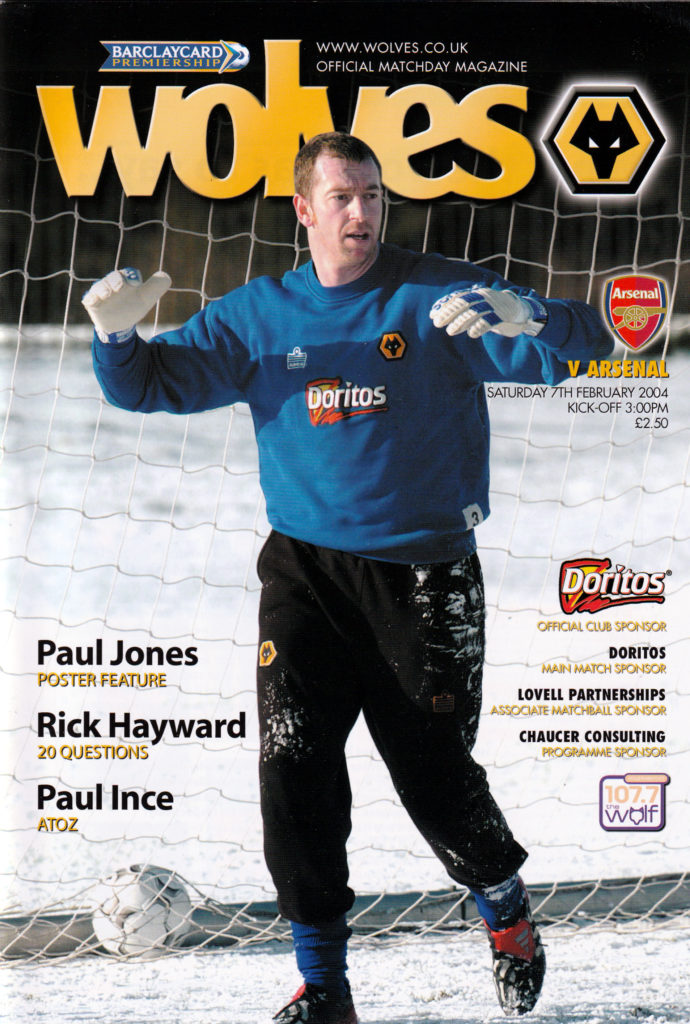 A snowy welcome back to Molineux…….as afforded by the club programme in 2004.

Charles Bamforth had a personal reason for catching up with his latest interviewee…..and not just because of the position in which the latter spent his excellent career…..

It took 26 years but finally I caught up with the first goalkeeper to be signed at Molineux after I wrote In Keeping With the Wolves, the book focused on keepers from Williams to Lange. The big surprise was that I did not hear a Welsh lilt.

“I was born in Chirk in Denbighshire in 1967 but was there for only two years,” says Paul Jones. “We moved to Hadnall in Shropshire and I attended Wem Secondary School.

“I started as a centre-forward, moved to centre half and then, when our keeper broke his wrist, volunteered to have a go in goal. I was a big lad. The chap who ran the school team was also manager of Wem Town, so I started playing for them at 15.

“I came from a farming family and worked on the farm as a lad. To be honest, I didn’t accomplish much academically at school – in careers interviews, I always just said I wanted to be a footballer!

“I suppose I would have gone into farming full-time if I had not made it. I had trials with Shrewsbury but nothing came of them, so I joined Bridgnorth Town as a 16-year old and got into their first team when I was 17. They had just got into the Southern League.

“When I was 18, Graham Allner signed me for Kidderminster. I had 242 games for them in the Conference playing part-time. Graham Turner had long since kept an eye on me and he signed me for Wolves in July, 1991.”

“Graham asked me if £350 a week sounded okay. My face must have said it all. Here’s me, coming from working all hours on a farm for not very much. ‘What? You want more?’ he said, smiling!

“Coming from a farm, I knew the value of money and have always been a bit of a saver and that has allowed me to lead a comfortable lifestyle after my career came to a conclusion.”

I told him about my book and that Tony Lange was the last entry. In his unfailingly polite way, he chuckled.

“We overlapped for a while – he was a good keeper but let’s just say Langy didn’t like to train! I arrived as understudy to Mike Stowell. Andy de Bont was the other one.

“It was a learning curve for me. We keepers got on well together. You need to. You work together and know what is needed. There was no keeper coach at first but Eric Steele arrived in my second season and he really improved me. I’d previously had a bit of coaching with Jim Arnold at Kidder.”

Paul played during the first-team tour to Sweden in the summer of 1991 and in a game against Gibraltar the following January but had to wait until November 3, 1992 for his debut in the old Division Two. It was a 2-0 defeat against Sunderland at Roker Park, Wolves fielding Jones, Kevin Ashley, Paul Edwards, Mark Rankine, Derek Mountfield, Paul Blades, Paul Birch, Paul Cook, Steve Bull, Andy Mutch, Robbie Dennison.

Although he played 17 senior games that season, there were no opportunities for him in 1993-1994. It was not until Boxing Day, 1994 that he re-appeared in the jersey following an injury to Stowell.

A little over a month later, his big moment of Wolves glory came in a televised FA Cup clash at Sheffield Wednesday. He made a late penalty save that made him a hero. The replay was even more dramatic.

“It was after we won that penalty shoot-out at Molineux that I thought ‘this feels right, me being in the first team’. So I was starting to get frustrated that I wasn’t getting in.” 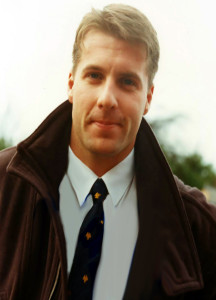 By March 5, Paul Jones’ name was once again to be found in the Central League side. He kicked off the following season with a starting place but was out after one game and November 25 was the date of his last Wolves game, at Huddersfield.

“Graham Taylor wanted to keep me and I knew that his policy was to stick with whichever keeper was in place at the time as long as they were performing,” he added.

“Before, I always knew I would be out of the side once Mike was fit. I did sign a two-year contract but not long afterwards Andy Mutch phoned me (I guess that was a bit naughty) to tell me that Stockport, where he then was, were really going places. Tommy Bennett and Chris Marsden were there as well.

“I went to see Mark McGhee, who had taken over at Wolves, and he agreed to let me go as he had his eyes on another keeper. I went to Stockport in July, 1996.”

The following season was the best in Stockport’s history. They finished runners-up to Bury in the third tier and reached the semi-finals of the League Cup, toppling Sheffield United and top-flight Blackburn, Southampton and West Ham before losing 2-1 to Middlesbrough on aggregate in the semi-final.

“It was brilliant at Edgeley Park,” Jones said. “In particular, I liked that I was playing week in, week out. We started winning and that was putting the manager, Dave Jones, in the shop window.

“That win over Southampton at The Dell brought Dave to their attention and he went as manager. I followed in July, 1997 and Dave had me as his first choice. In that first season, I was named Player of the Year.

“I got into the Welsh squad in succession to my hero, Neville Southall. Ray Clemence was my other idol because I was a Liverpool fan as a lad. Dave Beasant was at The Dell as well – he had been on loan at Wolves back in 1992-1993.

“Antti Niemi came in and he did well, to be fair, under Gordon Strachan. We had a great FA Cup run in 2003.  I played in the semi-final against Watford at Villa Park. Niemi was out for seven weeks.

“The week before the final at Cardiff, Niemi was still hobbling. It was obvious he wasn’t fit but Strachan called me aside on the Friday to tell me he was going with Niemi. We had a blistering row. However, when Niemi collapsed with 30 minutes to go, I went on as sub. I am the only keeper in FA Cup history not to have conceded a goal but to get a loser’s medal!

“I went on loan to Liverpool under Gérard Houllier in January, 2004. It was a dream come true as they were my team growing up. They wanted to keep me for the rest of the season but Jerzy Dudek was not as badly injured as they thought. In fact, he came back for the 1-1 draw at Molineux on January 21. I was on the bench.”

Jones had become Liverpool’s oldest ever debutant. He was little more than three months away from his 37th birthday. But his Scouse sojourn did not last long. In fact, in Wolves’ very next game, he was back in their colours at Portsmouth for a goalless draw. Dave Jones had come calling again.

“I really enjoyed my second stint at Wolves,” he added. “Unfortunately, we went down and Dave was under pressure. I knew his successor, Glenn Hoddle, from Southampton.”

It seems Jones was not Hoddle’s idea of what he wanted between the sticks. On September 25, 2004, he made his last appearance for Wolves in a 3-2 defeat at home to Cardiff in the final weeks of the Jones era. Compare the team with that in which the much younger Jones had made his Wolves bow: Jones, Keith Lowe, Lee Naylor, Seyi Olofinjana, Jody Craddock, Mark Clyde, Shaun Newton, Paul Ince, Carl Cort, Kenny Miller, Ki-Hyun Seol.

“Glenn Hoddle told me he wanted someone else. I went on loan to Watford in the December just before their League Cup semi-final against Liverpool, which we lost 1-0 both home and away. It was great experience to go back to Anfield.

“I had a brief loan spell with Millwall under Colin Lee at the start of following season. By this stage, I was 38. Although I had gone back to Wolves, we had kept our house near the south coast, so when Ian Holloway asked me if I was interested in going to Queens Park Rangers, I jumped at the chance.

“Two days later, Ian was sacked but Gary Waddock was promoted from reserve manager and he said that he was keen if I was. So Hoddle agreed to scrap my contract and I went to Loftus Road in February, 2006 and saw out my career there, finishing in October, 2006 in a game at Hillsborough, although I did play a couple of games for Bognor to help out my friend, their chairman.”

As well as a League career spanning nearly a decade and a half, Jones won 50 full caps for Wales, succeeding the legendary Southall and being given his head by another of the handful of men who have had two stints of duty for Wolves, Bobby Gould.

“I went on for Nev at half-time in a World Cup qualifier against Turkey in Istanbul in August, 1997. It was 3-3 when I went on and we lost 6-4. Against Scotland at Kilmarnock, I again went on for the second half, this time to replace Andy Marriott.

“Mark Hughes took over from Bobby. I know him very well from my days at Southampton – we used to room together. We went so near to qualifying for the Euros in 2004 but lost out to Russia. It was so disappointing.

“John Toshack took over from Mark and soon he started bringing in youngsters like Wayne Hennessey, who was 17 when I went back to Wolves. I let Mark and John know how good Wayne was – definitely one to keep an eye on.

“Because I was always careful about saving, I was able to make some sound property investments when I retired. It means I can enjoy a comfortable lifestyle. We still live in Felpham in West Sussex.

“I did coach the keepers at Wales under Toshack on a part-time basis and helped Graham Turner at Hereford with some keeping coaching. I also kept an eye on players across the South for Tosh but, to be honest, I enjoyed not being in the thick of it. I had offers to go coaching for the likes of Portsmouth, Brighton and Sheffield Wednesday but frankly it’s 24/7 and I didn’t want that. It is good to be with my family. 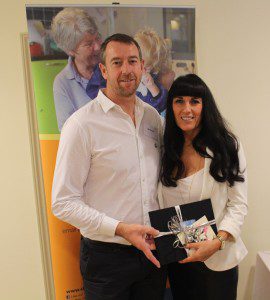 “I do have a small coaching set up. I am also very glad to be a patron of Chestnut Tree House, the children’s hospice in Sussex (www.chestnut-tree-house.org.uk). It costs more than £3m a year to run and the Government provides just £250,000. So there is a lot to raise. I love my golf and we do celebrity golf days as fund-raisers. My wife is a great organiser. So far we have raised over £200,000.”

By the time Paul Jones hung up his boots, he had made more than 350 League and cup appearances for his various sides to add to all those non-League games. His valuable contributions are very different nowadays – and are as much to be applauded as his many saves for clubs and country.