How Mick Amused At The Mic

McCarthy A World Cup Star – On And Off The Pitch

It is already five and a half years since the departure from Molineux of Mick McCarthy, the last manager to lead Wolves to the Premier League.

But the occasional reports we receive of his humorous asides elsewhere will still raise a chuckle among those who knew him here.

Journalist Christopher Davies captured one or two McCarthyisms in the highly entertaining Behind The Back Page book we have just re-read, not least those that arose during the Irish assault the manager led on the 2002 World Cup finals in the Far East.

Reporters who had trailed round with the national side for a few years were well used to some entertainment at their press conferences thanks to the notorious forgetfulness of Jack Charlton.

On at least one occasion, in fact, the former Leeds and England centre-half had stumbled over McCarthy’s name when naming his team for them and referred to him as: “That big lad – what do you call him?”

And when once asked by a Scandinavian journalist which Swedish player he thought might cause Ireland most trouble, Charlton reportedly said: “The blond fella.”

Barnsley’s finest therefore had something to live up to when he took over and had his proudest hour as an international manager when progressing with a Robbie Keane-inspired side to the last 16 in Japan and South Korea.

Davies recalls the sweet moment Mick had in the qualifying programme when Dutch boss Louis Van Gaal spoke about the possibility of his opposite number being sacked if his team lost their clash in Dublin.

Not surprisingly, McCarthy wasn’t amused and said in his last-minute rallying call to his players: “Just give me the chance to shake his hand afterwards and say ‘unlucky’.” And that, we are assured, is the family-audience version.

On the day England were thrashing Germany 5-1 in Munich, the Irish unexpectedly won 1-0 and the 1998 semi-finalists had an extended summer holiday they didn’t want.

It was at the finals, though, that Roy Keane sensationally walked out on the squad – his bust-up with McCarthy having a Molineux sequel when their next meeting came with a handshake before a televised Wolves v Sunderland game in the Championship. 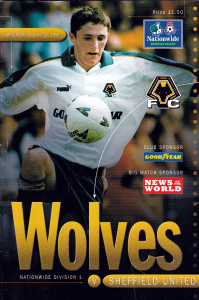 The pre-superstar Robbie Keane……a hero in the absence of his namesake.

And the quick-witted Christopher Davies used the on-going row between the two when doing a karaoke turn to Gloria Gaynor’s I Will Survive while in the Far East. He tells readers that (maybe in his best South Yorkshire accent), he adapted the lyrics as: “Once I was afraid, I was petrified…….by that lousy f***** captain who has left my side.”

Behind The Back Page reveals that Mick was asked before one big game at the tournament whether he had received any good-luck messages and said: “Yeh, one……from the missus. Not sure how she got my number. I didn’t tell her where I was going.”

Of the team’s success, Davies – best known as a Daily Telegraph correspondent – said: “I was pleased for Mick, who is one of football’s good guys and as honest as the day is long.”