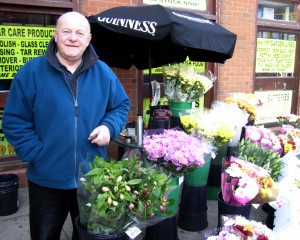 Graham Newton at Perton on his other ‘pitch’.

Maybe the subject hadn’t come up before or we just hadn’t asked the right questions.

But only in the last few days have we learned for the first time that one of our good friends from this patch was present 50 summers ago on the famous night on which Wolves spectacularly beat Aberdeen in the final of the first USA tournament.

More than once, we had wondered whether any supporters – other than any well-heeled types briefly attached to the official party – had been in attendance on this tour. After all, the current trip to Austria will remind us that fans travel abroad in good numbers these days.

We had never heard from anyone of a gold and black disposition, other than players and officials, saying they were in the Los Angeles Coliseum on Sunday, July 14, 1967 – a date that, amazingly, is half a century ago come this Friday.

Now, though, we can name a lifelong Wolves follower who was there, albeit under unusual circumstances.

Graham Newton wasn’t paying out of his own pocket to trek round the States – that would have been an expensive, tiring business out of the reach of all but those with money to burn and time on their hands.

But he was among the 17,824 crowd who watched in disbelief as Ronnie Allen’s newly-promoted side won an epic encounter 6-5.

“I was playing for Atlanta Chiefs at the time after being taken there by Phil Woosnam.” he said. “The way it worked was that we would fly to the West Coast and maybe stay there for two or three weeks, playing matches in Los Angeles, Vancouver and somewhere like Oakland.

“Then we would play three or four home games in a row before heading to the Eastern Seaboard for two or three weeks.

“I remember we were in LA preparing for a game there a couple of days after the Wolves v Aberdeen final. A group of us went to the Coliseum to watch and I sat with Jimmy Bloomfield’s nephew, Ray Bloomfield, the former Arsenal defender Gordon Ferry and several other players.

“We were spell-bound and had never seen a game like it. I tell people the score was 6-5, with a Golden Goal winner, and they think I am joking.

“I’m from Bilston and had been a young player at Wolves as well as a supporter, so the club were in my blood. It was wonderful to be there for such an unusual and dramatic game.

“We were in the same hotel as the Wolves lads near a corner on Wilshire Boulevard and I remember being with Bobby Thomson, whose cross had led to the winning goal.

“We had known each other since we were lads and he was buzzing about what had happened and what the Wolves had achieved over there.”

Newton, now in his mid-70s and retired from the flower trade, lives in Pattingham, his outgoing, amenable nature summed up by the fact he is currently organising a golf tournament in aid of the Teenage Cancer Trust.

And as a player….

The charity are close to his family’s hearts and will benefit considerably from the event at Patshull Park on Friday, September 22. Teams of four cost £200 (£50 for individual players), with breakfast, an on-course barbecue and two-course dinner provided.