Gardner Gave Hope – But Where Did He Go? 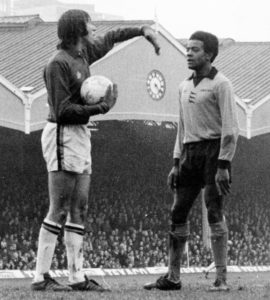 Exactly three weeks on from our piece detailing Bob Hazell’s historic England under-21 debut, we now find ourselves writing about the first black player to appear in Wolves’ first team.

Don Gardner beat his fellow Jamaican into the League side at Molineux by some three seasons, with George Berry seen for the first time at that level in between the two.

Berry made a particularly high-profile start in the side with his appearance on the day the Second Division title was secured at home to Chelsea in May, 1977, the first glimpse of Hazell on the big stage following in a top-flight defeat at Newcastle seven months later.

Gardner’s introduction was a little lower-key given that it was as a substitute for Steve Kindon in a 5-2 Bank Holiday home win over Luton on March 31, 1975.

Wolves trailed by the half-hour but were three ahead come the hour mark, making this the perfect chance for the 19-year-old attacking midfielder to take his first steps in Division One.

There is an argument for thinking Bill McGarry was indulging in some squad rotation as the visit of the relegation-bound Hatters was Wolves’ third game in four manic days of Easter.

They had lost 3-0 at Tottenham on Good Friday and beaten Manchester City by the only goal at Molineux the very next day. And Kenny Hibbitt, who had followed up his Wembley goal against City the previous March by hitting the decider on Easter Saturday, clicked in a big way against Luton by netting a hat-trick. Willie Carr and Peter Withe were the other scorers.

With Kindon sidelined, Gardner was given a place in the 11 for the trip five days later to QPR, where Wolves lost 2-0 against a side who would finish one place above them in mid-table.

He was also on view in the following midweek in a defeat at Derby – on their way to lifting the title under Dave Mackay. This time opportunity knocked as a substitute for Steve Daley but that, sadly, was the end of his senior Wolves career in competitive football.

Kenny Hibbitt – hat-trick came in a rich vein of form.

We would love to hear what became of Don, who was born in the Caribbean on August 30, 1955 and is said to have had a trial with Coventry before signing at Molineux. He was released by McGarry at the end of his modest breakthrough season.

We have occasionally sought to catch up with him but without success and would love to be contacted by anyone with information as to what happened to him in his post-football years.

If any of our readers know him, or have known him relatively recently, please get in touch – on the proviso, as ever, that he would be happy for contact to be made.