Booked – And Emlyn Was Delighted!

How Hughes Stepped Out Of One Spotlight And Into Another 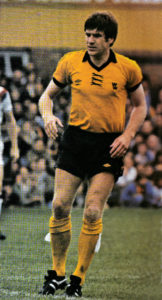 Emlyn Hughes…..what a life, what a night!

Billy Wright was in on it. So, too, Bob Paisley, Bill Shankly, Jack Taylor and most of John Barnwell’s upwardly mobile, Wembley-bound squad. But, in keeping with the essential element of surprise, the main man was in the dark until the last dramatic moment.

Tuesday, February 26, 1980 at Molineux was about more than Wolves’ first League victory for seven seasons over a Liverpool side enjoying their years of near-invincibility.

It was also the night a beaming home skipper had the icing spread over his cake by the famous tones of Eamonn Andrews.

“Emlyn Hughes, of England, Liverpool and Wolves….This is Your Life.”

Never before in its 12-year history had makers Thames TV recorded this must-see programme outside London. It was also by far the biggest studio audience – 1,000 fans, relatives, friends, team-mates and opponents saw to that.

The ‘ambushing’ of the heroic defender was planned for several months but the fact he had just been named man of the match by sponsors Staffordshire Building Society meant the evening could have gone no better.

No matter which side Emlyn was on, Wolves had not beaten Liverpool since a Hughes own goal helped them to a 2-1 home success in 1972-73. Furthermore, they had scored only once against them since Steve Kindon’s memorable goal in vain on the infamous title decider/relegation night of April, 1976 and had been beaten 3-0 at Anfield in the November of 1979-80.

This inspirational Barrow boy had experienced mixed feelings that afternoon; pride at his wonderful, prolonged reception from The Kop but deflation at the result against a team who were on the way to retaining their League title.

Almost four months later, he had no inkling of what was in store and said when the penny dropped: “It’s just great, unbelievable.”

Such was the need for secrecy that Thames bosses, with the help of Billy Wright at ATV in Birmingham, passed off the presence of the TV lorries in Molineux’s car park by saying they were for the staging of a sports forum in the huge Social Club next door.

Billy was purported to be the main attraction at that but was instead busy ensuring that as few people as possible knew that not only had a large stage been built inside but also various camera positions raised.

“The first I knew about it was when an internal memo dropped on my desk,” said ATV sports chief Gary Newbon. “Billy swore me to secrecy and explained what was happening.”

The scene was set even more perfectly as John Richards hit the only goal, turning inside Phil Thompson following a long diagonal ball from Peter Daniel, baring down on the North Bank end and driving past Ray Clemence in the 71st minute. Wouldn’t you just know it…..Hughes then headed off the line from David Fairclough in the dying minutes, having earlier cleared when Kenny Dalglish followed Alan Kennedy in hitting Paul Bradshaw’s woodwork.

Two minutes before the end, referee Eric Read of Bristol gave a pre-arranged signal towards the tunnel area, where Eamonn Andrews was lurking and readying himself with his famous red book and a microphone plugged into the loudspeaker system, so the crowd of nearly 37,000 could be part of the moment.

As the final whistle blew on an epic victory, Newbon and commercial manager Taylor struggled to locate Hughes among the back-slappers but eventually steered him towards what he thought was going to be a chat with Billy, only for the Irish presenter to step in and utter his famous words.

‘King Emlyn is crowned with blarney’ announced the Express & Star the following night, the story coupled on the front page with a photo of the two men, their faces beaming.

Newbon had a weekly column in the paper at the time and used it to reveal, among other things, that the referee’s room was used to brief the subject on what was happening.

While he showered and floated only gently back towards earth, the audience filed into a landmark building that is no longer a feature of the Wolverhampton landscape.

It was the first time a This is Your Life programme had been recorded with all those present knowing (albeit for only an hour or so) who the subject was going to be. Tickets were hurriedly allocated around fans who thought they were about to head for home and journalists in the press box were handed passes. Wolves Heroes’ two co-owners were in attendance for a close-up of proceedings. 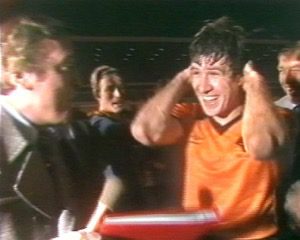 The moment of ambush….

Among those in our midst were George Best, Joe Mercer, Gareth Edwards, John Toshack, Kevin Keegan, Shankly, Paisley and various members of the beaten Liverpool side, although we were told by Newbon that Clemence and Phil Neal did not stay.

For the inner circle, it had all been about preventing the cat being let out of the bag. Suddenly, a horse had been let out of its box, though…….Red Rum was also there, with Jonjo O’Neill on his back. Gee! What time did we get home that night?

The programme went out, as usual, at 7pm on the Wednesday – between Crossroads and Coronation Street. With all respect to Billy, we all agreed it had been a step up from a sports forum. And we still had the League Cup final to come, two and a half weeks later.