A Wolf Pack Without Teeth 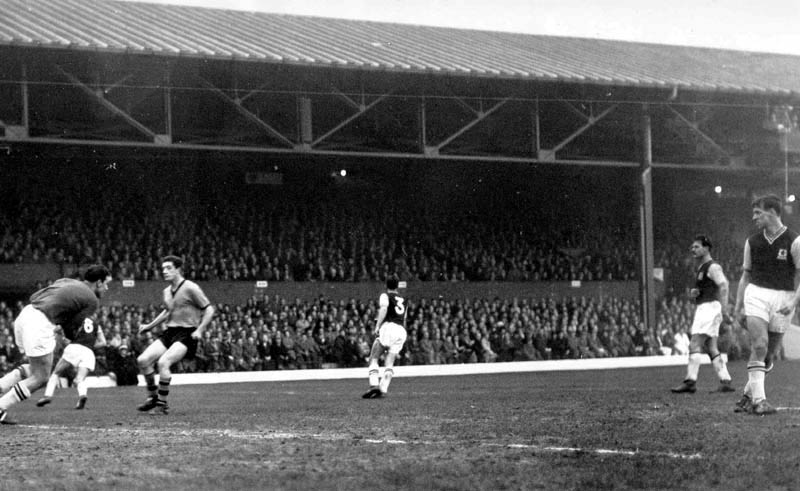 Gerry Mannion in action in Wolves’ 1960 FA Cup semi-final victory over Villa at The Hawthorns.

Have Bolton always tended to prove troublesome opponents for Wolves? Was there ever a time when they were seen as a comfortable proposition?

Yes and no but the meeting in the autumn of 1958 – in the Charity Shield, no less – was more problematic than most given the junior look to Stan Cullis’ forward line.

Wolves may have been League champions and on the way to retaining their crown but the FA Cup winners of the previous spring were more than a match for them on the early-October Monday on which they contested the prize Arsenal and Chelsea will fight out in the next fortnight.

Three members of the visitors’ attack at Burnden Park (the idea of a Wembley setting for this fixture was still more than a decade and a half away) had totalled only four competitive first-team matches between them, with no 7 Gerry Mannion making his senior debut, Cliff Durandt given his senior introduction only two days earlier and left-winger Des Horne as the relative veteran of the trio as a result of a mere three League outings in August and September.

Jimmy Murray, the two-goal hero of the 4-0 slaughter of Manchester United that weekend, was still around, so was Bobby Mason at inside-left.

But Wolves were without Peter Broadbent – on England duty against Ireland 48 hours earlier – and injured duo Norman Deeley and Jimmy Mullen, the latter of whom had also netted against Matt Busby’s men.

And the absences showed at a time when the gold and black march was continuing largely unabated at home and in Europe.

The champions had registered a goal-filled run of four successive victories in September and would strike 15 goals in posting a trio of wins in Christmas week.

This was Bolton, though, and an assignment too far in the presence of the two South Africans and Warrington-born Mannion, who was tragically killed in a car crash in 1994 at the age of 54.

Freddie Hill and Neville Bannister scored late in the first half and Bolton were cruising when Nat Lofthouse netted either side of the hour mark to make it four. Durandt hit a consolation near the end.

It might have been different as early chances were spurned while the home side had a crisis of their own.

Keeper Joe Dean was injured after less than a quarter of an hour and Lofthouse, for an incredible third time against Wolves, took over between the posts.

Watching League officials granted special dispensation, though, for Eddie Hopkinson to swap his seat in the stand for his more familiar role. The regular custodian had not been chosen as he was due to play for the Football League the following day but changed and trotted out within another ten minutes.

Cliff Durandt….scored in an under-strength forward line in the Charity Shield.

This was the only one of Wolves’ five Charity Shield appearances that has ended in defeat, although three of the other four were drawn and the silverware shared.

Their struggles against the northern Wanderers were further illustrated in that 1958-59 campaign.

The two teams met four times and Bolton won three of them, including an FA Cup fourth-round triumph at Molineux, while giving up only one point out of four in the two League clashes despite Wolves’ successful title defence.