A New Addition To Our Line-Up 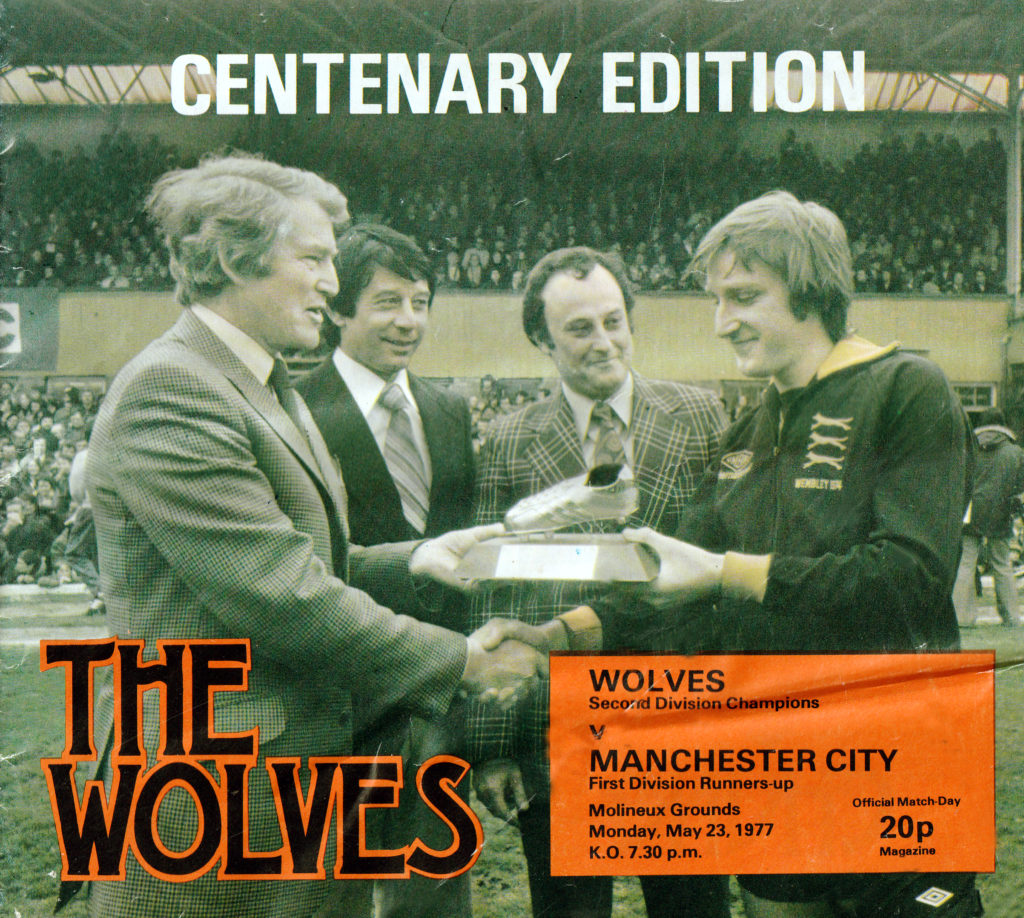 How the front page of the programme for Wolves’ centenary celebration match in 1977 showed Steve Daley being presented with his Player of the Year award by chairman Harry Marshall.

John Richards didn’t make it on to the list; nor did several other worthy candidates from the 1970s and early 1980s, such as Derek Parkin, John McAlle and Geoff Palmer.

Steve Stoutt did, though – he beat Steve Bull in the process – and Floyd Streete, Tom Bennett and Mark Rankine are among what might be regarded as the other surprise inclusions.

We are talking about recipients of Wolves’ Player of the Year award and a new area of this site that we are delighted to launch today.

This added feature has been some time in the planning and has taken considerable research as it appears that a definitive list of the chosen men has been hard to come by – until now.

The traditional winner’s boot, supplied by local jewellers Beckett’s and with which inaugural recipient Steve Daley is pictured right, filled in many of the gaps for us, engraved as it is with many of the winners’ names.

But the inscriptions did not seem to take in the period from the early 1990s, when the Player of the Year voting became the task of Wolves members rather than, as in the past, the Official Supporters Club.

With help from various individuals, though, we busied ourselves to complete our list, which is now visible to our loyal army of readers.

And our endeavours reminded us of some favourites that many supporters might have forgotten were winners. George Berry, Alan Dodd and Lee Naylor perhaps?

Predictably, for a man who so dominated the team he played in at times, Bully has won the award more than anyone else (on three occasions), with Paul Bradshaw, Joleon Lescott and Wayne Hennessey the only others to have received it more than once.

Talking of which, there are rather too many goalkeepers in there for our liking – John Burridge, Tim Flowers, Mike Stowell and Matt Murray also feature on the roll of honour. Four times in five years in the early 1980s, in fact, the winner was a player in this position.

Wouldn’t it reflect a team in better health if, more often, the feted individual was an attacking player, like when Helder Costa picked up the big prize in May?

As we start to wonder who the fans’ pick next spring will be, we invite you to run your eye over the past winners by clicking on the P.O.T.Y. icon on the header bar near the top right of this page.