Nice Day For A Brown Wedding 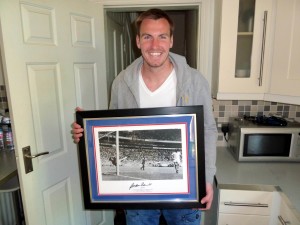 Scott Brown when ‘snapped’ by us at his home in Wolverhampton several years ago.

Monday, July 3: Re-read the text that arrived from Wolves fan Graham Large three weeks ago, telling me he was at the wedding of former Wolves youngster Scott Brown in Woolacombe Bay, Devon. Pat Mountain, the goalkeeper coach at the club for many years, was another of the guests. Although still contracted with Wycombe, Wolverhampton-born Scott spent half of last season on loan back at Cheltenham, where he has now played more than 300 games. At 32, he might still be considered to be in his prime.

Saturday, July 8: Met up with former Wolves youngster Graham Newton over a coffee/beer just outside Tettenhall to discuss helping him with the publicity for his charity golf day in late September (please see separate story from July 12). The get-together became all the more pleasurable when former Molineux director Doug Hope wandered over for a chat as we were departing.

Monday, July 10: Was delighted and impressed to hear that Richard Skirrow has kept up his once-a-week five-a-side football sessions in one of the university buildings near Molineux. All this despite being resident half an hour away and now being retired. The information came to light when we bumped into him and had a chat about the release of the Football League fixtures – for so long one of the biggest dates on his calendar.

Friday, July 14: Heard from Charles Bamforth about the passing-away of former Wolves youngster Ken Wimshurst – a man well known to our good friend Les Wilson during their time together at Bristol City in the early 1970s. All this after we were informed earlier this month that another one-time Molineux hopeful, Doug Devlin, had died – a sad occurrence that had Paul Walker ringing us from Leeds to share some recollections.

Monday, July 17: Turned on Sky Sports and the first face I saw was that of Keith Downing, on his way back from the European Under-19 Championships in Georgia and being interviewed at the airport back in England. Like Paul Simpson earlier in the summer, he goes down in history as a cup-winning international boss – happy days! 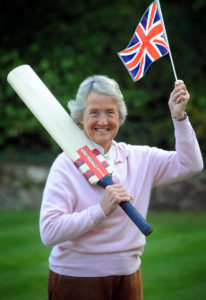 Sunday, July 23: Couldn’t help but be moved by the lovely tributes to Rachael Heyhoe Flint at Lord’s today. The name of one of Wolverhampton’s most famous sporting celebrities was on many lips at the women’s World Cup final between England and India and an extended feature appeared on the Sky Sports coverage during the lunch break. It was presented by the excellent Alison Mitchell, who was among the capacity turn-out at Rachael’s funeral in February.

Saturday, July 29: Here we go again! Back at Molineux this afternoon for the pre-season game against Leicester – and we were all enthused by what we saw. Not surprisingly for a friendly, we were a bit down on former players in the press box but we did have a tanned Andy Thompson, who has had a summer holiday in Fuerteventura, and Matt Elliott among us.