A Thumbs-Up From Budgie

But It Was Roger, Over And Out, All Too Soon

It will surprise none of our readers that this article has been penned by Charles Bamforth. Read on and you will probably agree that it has his fingerprints all over it….. 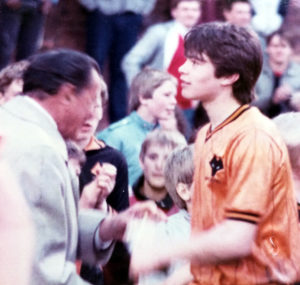 Roger Preece being rewarded as a Midland Youth Cup winner with Wolves.

“You are my tip for the top.” So said John Burridge in 1983 to a young Shropshire lad who had caught his eye among a promising crop of hopefuls including Darren Wright, Stuart Watkiss, Graham Rodger, Derek Ryan, Martyn Bayly and Joe Jackson.

The player singled out by Budgie laughs self-deprecatingly. “Well, that shows just how good a judge of a player John was!”

Roger Preece is comfortable looking back on an honest and worthy career in the lower divisions. And his ready approachability meant I was able to confront him with this comment from Nick Harrison of The Leader in Wrexham: “Preece was a lovely guy off the pitch but an animal on it. Him and Joey (Jones) were made for derbies.

“I was certainly whole-hearted,” adds the lad who stood out in training in the eyes of a much-loved keeper at Castlecroft three and a half decades ago. “Perhaps I didn’t have the talent of other players but I got stuck in and made a career of it.”

Roger Preece was born in Much Wenlock in June, 1968. “My dad and granddad would take me to watch Wolves if I was good – and Shrewsbury if I wasn’t!” he adds.

“We would park down by West Park and walk up to the ground. I always remember the buzz of excitement from the noise of the crowd as we approached Molineux.

“Derek Dougan and John Richards were my heroes. I well remember running on to the pitch after the semi-final of the League Cup in 1980 and congratulating Geoff Palmer.

“I was brought up in Telford, went to the Manor School in Hadley and played for the school as well as Telford Boys and Shropshire Boys. I went to Ipswich for a trial but they did not sign me.

“Eventually, it came down to Wolves or Shrewsbury, with me choosing Wolves of course – they were First Division. I knew at the Christmas before I left school that I would be joining them and, frankly, I didn’t apply myself to my schoolwork after that point. Of course, you look back and realise it was not the best thing to have done. I was fortunate to make a career in the game but things could quite easily have gone the other way.

“At first, I went to training at Castlecroft on Tuesday and Thursday evenings when the likes of Ron Bradley and Geoff Blackwell would coach us. Geoff’s son, Steve, became a YTS lad at the same time as me in 1984.

“Things went well and, although I was still at school, I played a lot in the Midland Intermediate League side under Frank Upton. Tim Flowers was a year ahead of me and I will never forget the first time I saw him in training. I had never seen any young keeper with such ability. I remember remarking to my dad as we left the ground that evening about what an amazing talent Tim had.

“I was soon playing quite regularly in the Central League side, which was great as you would play on clubs’ main grounds. Unfortunately, my mentor, Frank Upton, was let go by Tommy Docherty, who brought in Greg Fellows. That marked the end for anyone associated with Frank and I was told I had no future. It was heart-breaking. Yes, I was a bit hot-headed on the pitch and got into a few scrapes but to be told that I was being released was awful.

“I went to Leicester on trial for a couple of months but did not play particularly well and headed back to Telford. Very soon, I got a call from Frank Upton, who had been made assistant manager at Coventry.

“So I signed YTS forms and went to Highfield Road. When I turned 18, they told me I wasn’t going to get a contract but I had done enough for the manager, John Sillett, to write a letter of recommendation to Dixie McNeill, a former colleague of his at Hereford. He was by now managing Wrexham.

“I have a real soft spot for Wrexham. They gave me my chance – I actually made my first-team debut in a European fixture – and learned a lot as a full-back from the ex-Wolves man, George Showell, who was as hard as nails.

“I played well over a hundred games for Wrexham and scored a dozen goals, although I was sent off five times! But Brian Flynn, who took over from McNeil, did not rate me and I was given a free transfer. Wrexham were almost bottom of the Fourth Division and I signed for their bitter rivals Chester, who were a division higher.”

In six seasons with Chester, Roger played 170 games, scoring four goals and moving into midfield. He enjoyed his time with the colourful Harry McNally and then Graham Barrow, Mike Pejic and Derek Mann but not with Derek Ratcliffe, who freed him.

“I’d had a bad injury and was struggling to come back but I was devastated to be let go,” he added. “I spent a short while at Southport and was then lucky to meet up with the manager, Jake King, at Telford. When he got the Shrewsbury job, he hired me in 1997 as a player but also as youth coach. I moved to Shrewsbury and that is the house I have lived in ever since.”

Preece played over 50 games for the Shrews, hitting three goals but, when he went in one day to see that King had been replaced by Kevin Ratcliffe, he knew the writing was on the wall.

“Ratcliffe wanted me as a youth coach but not as a player, so I went with Jake King back to Telford before going to Newtown as manager in 2003. That was useful in demonstrating to me that I would never be a manager! 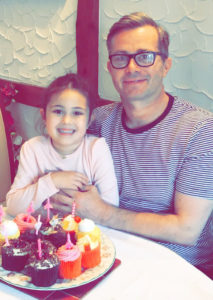 “I just wasn’t cut out to be ruthless with players. I was too loyal in my three-plus years and some of them let me down. I was always going to be a better coach or no 2.

“I coached several teams in the League of Wales and at the next level down and also coached in the centres of excellence at Shrewsbury and Wrexham. But those days are over. I am happy in my role in sales of sportswear and being a father to Georgia (25), Ella (22) and Macy (6).”