Chorus Of Approval For Our New Feature 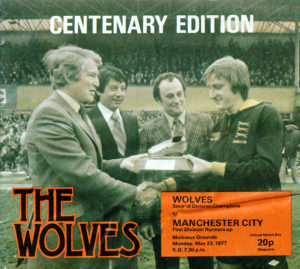 Sammy Chung and Eric Beckett look on as Steve Daley is presented with his Player of the Year award by chairman Harry Marshall.

We were both flattered and surprised by the feedback to the new Player of the Year section we introduced for our readers late last month.

In using Facebook as well as our home in cyberspace to promote an area we thought should have a place in the annals of Wolves history, we were delighted to see and read such positive remarks from fans.

‘Excellent…..a super addition’, ‘Great for browsing round’ and ‘A fascinating website’ were among the comments we received and we hope you have by now cottoned on to what they refer to.

If not, please click on the P.O.T.Y. icon near the top right of this page and take a look for yourself – this concisely presented information has been missing from the gaze of supporters for too long.

What we didn’t expect was to hear directly from two friends of ours, each of whom was able to shed a little extra light on an award that generates much interest at the end of each season.

Alison Bicknell contacted us after seeing the photo (used again above right) of Steve Daley being congratulated by chairman Harry Marshall in 1977 after his success in being named the club’s first Player of the Year.

She said: “My dad has been a Wolves supporter going back to the 1940s and I have always lived in this area without being as interested in football myself.

“But I can remember the start of this award because I worked at the time in Queen Street for the jeweller, Eric Beckett, who is standing between Sammy Chung and Steve Daley on the photo.

“Mr Beckett designed and produced the boot that is being handed over and I recall thinking Sammy was a lovely man when he came to the workshop more than once during the manufacturing process to see how it was progressing.” 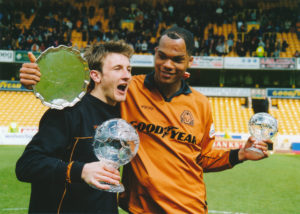 Big smiles from Lee Naylor and Joleon Lescott after they found themselves among the prizes in 2001. Photo by Mutchy.

From further afield, we heard as well from Mutchy, a keen photographer who remembered being on the Molineux pitch when Lee Naylor received the award more than a decade and a half ago.

“I am pleased to be able to see from the engraving on the trophy on my photos that it was the 2000-2001 season,” said a message to us from the taker of the picture on the left.

“Sir Jack was out there on the pitch and conducting the crowd at one point. He was delighted to see the young players doing well and Lee had had a really good season – he probably doesn’t get the credit now that he deserved.”