Leap Of Faith From ‘Train Not Stopping At This Station’ 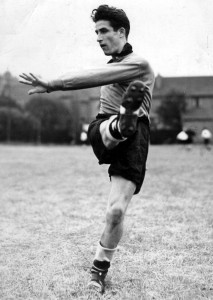 Doug Taylor in training with Wolves.

From the tales of the strictly unexpected comes this story of a missed pre-match rendezvous, a daring jump from a train and then starring roles in a precious away victory.

Oh……and all followed by a hasty trip to the tailor’s and a police visit.

The drama didn’t surround a Wolves match but did engulf two players formerly with the club, one of them a member of the triumphant FA Cup final team in 1949.

Doug Taylor and Wembley winner Bill Crook were Walsall players in the mid-1950s when they made their unscheduled exit from a service chugging through the Kent countryside.

Along with Saddlers centre-half Albert McPherson, they had become so consumed by a game of cards that they missed their stop en route for a vital Third Division South game at Gillingham.

It took the chivalrous intervention a fellow passenger, who had seen the rest of the squad get out of other carriages, to inform them of their oversight and do whatever he needed to do to slow the train down, so three visiting players didn’t get into trouble by pulling the emergency cord.

In the meantime, anxious Walsall manager Jack Love arranged for a taxi to be laid on to ferry the trio back from Whitstable, 25 miles away, and put himself and 40-year-old trainer Jackie Maund on stand-by to start.

But he was pleasantly surprised when such contingencies proved unnecessary and the three players were able to line up in the 3.15 kick-off at the Priestfield Stadium, where Taylor hit the only goal mid-way through the first half.

The story is told at length by David Instone in the latest issue of the outstanding Backpass nostalgia magazine, which has Leeds winger Eddie Gray on the front.

It had first come to our attention at Albert’s funeral two and a half years ago, when press cuttings of the escapade were among the keepsakes on display.

And his widow, Audrey, laughs at how he added to his usual shoe-polishing routine by that day proudly putting on a new Austin Reed suit for the first time. The light grey item was damaged beyond repair when his unusual disembarkation led to a meeting with some lime on the embankment.

She also recounted to us how the police had subsequently investigated the matter and made a visit to Fellows Park – happily one that ended with the three players being asked for their autographs as collectors’ pieces! 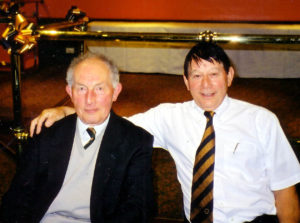 Walsall were bottom of the table at the time of the fixture in March, 1956 and in danger of their usual cap-in-hand bid for re-election. But the two points started a big upturn which led them to safety.

Taylor was featured by us in the article https://www.wolvesheroes.com/2010/05/25/way-back-when-7/ seven years ago, since when we have lost his sister Doreen, a Wolves lover who lived in Penkridge.

He was a forward who remained goalless in the three League appearances he made while at Molineux but scored in a floodlit friendly against Racing Club of Buenos Aires.

Crook, a wing-half, played 221 times for Wolves, both men going on to appear several dozen games across the patch at Fellows Park.

Issue 55 of Backpass is now available – for details of how to purchase, please click on the icon to the right that bears John Richards’ picture.