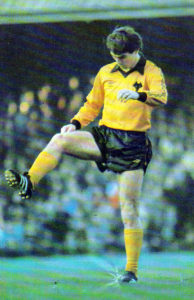 Tickets are selling fast for a fund-raising evening this autumn in support of former Wolves winger Dave Thomas.

Many of the ex-England international’s colleagues from his Molineux stay nearly 30 years ago are rallying to the cause by staging and turning out at a dinner at the Red Lion in Bobbington on Thursday, October 5 – the player’s 67th birthday.

The beneficiaries are Guide Dogs For The Blind, for whom Dave has been an unstinting supporter in the years since he was told he was losing his sight.

Entertainment at the £30-per-head night is being provided by Steve Kindon – a team-mate at Burnley and with England Youths – and Steve Daley.

“Dave’s doing okay…..he is getting on with his life and still playing golf off a handicap of nine or ten,” Kindon told us this afternoon after stepping off a plane bringing him back from a week in Spain.

“Sadly, he has a condition that will take his sight sooner or later and he already uses a guide dog but he is very optimistic as well as brave.

“I knew his birthday was in October and we were keen to arrange this dinner for a Thursday night in that month. When we realised it was his special day, we thought: Bingo!

“He and I have known each other since we were 16, played in the same sides for five years and won the FA Youth Cup together with Burnley 50 seasons ago as well as being team-mates with England Youths.

“Among those coming to the dinner are Phil Parkes, Geoff Palmer, Derek Parkin, John McAlle, Kenny Hibbitt, Willie Carr, Mel Eves, John Richards, Norman Bell and the former QPR forward Don Givens, who played alongside Dave down there and decided he wanted to support the cause when he heard about it.” 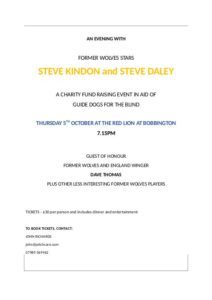 Thomas will be the guest of honour at the dinner, for which the promotional literature self-deprecatingly uses the phrase: “Plus other less interesting Wolves players.”

As if to underline the involvement of former Molineux personnel, tickets are available from John Richards at john@pitchcare.com or on 07989-569962.

The evening in a month and a half’s time kicks off at 7.15pm. A bigger ‘do’ at Burnley – the club where Thomas made around 175 first-team appearances from the start of his career – has already sold out.