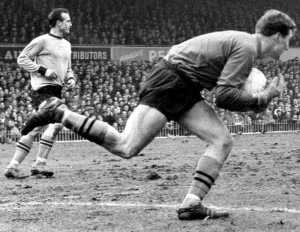 Gerry Harris in action as he covers keeper Fred Davies. The left-back was one of the many members of Stan Cullis’ massively successful side who remained at Molineux for years.

Identifying the most experienced side Wolverhampton Wanderers have ever fielded is a task we will put off for another day.

But the rapidly changing face of teams in the modern age, not least at Molineux, prompted us to look at the 2017 Wolves and see how they compare statistically with their counterparts from 1957, 1977 and 1987. The results are quite astounding.

We scoured the line-ups Stan Cullis chose 60 years ago and homed in specifically on the 0-0 draw at Arsenal on March 23, 1957. After each player’s name below is the number of competitive games he played for Wolves and his place in the club’s all-time list of appearance makers (if in the top 80).

That brings a total across the side of 4,044 games, at a remarkable average of 367 Wolves appearances per man. 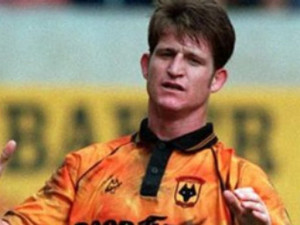 Andy Mutch……didn’t have to look far round the dressing room for fellow loyal servants.

The figures in the former teams, of course, are those achieved over entire Wolves careers and we trust that many of the current squad are successful enough here to ensure their stays are long ones. And the picture wouldn’t have been so graphic had, say, Carl Ikeme, Danny Batth and David Edwards been in the weekend 11.

But the players on duty at kick-off will have to play around 200 more Wolves games apiece even to reach the experience levels of the 1987 side.

That fact underlines that there are some vast differences – and the 1977 line-up would have been much more experienced still if Phil Parkes and Mike Bailey had been in it.