Billy Still Our No 1 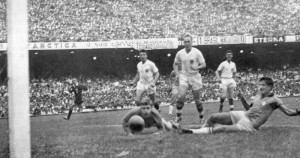 Billy Wright in action for England against Brazil at the Maracana in 1959.

With the spotlight about to switch back to international football, we have decided to look once more at the subject of record caps figures.

News of Wayne Rooney’s England retirement is still fresh in our minds, the forward having taken his decision to quit at the ultimate level not long after overtaking fellow Old Trafford legend Sir Bobby Charlton as England’s all-time highest goalscorer.

But he remains six games behind Peter Shilton at the top of the country’s appearance makers – a list that always is always of great interest to Coventry-based Wolves supporter Don Noble.

We last wrote on this subject in April, when we made the point that all of Billy Wright’s 105 caps were properly and fully earned; not in substitute outings or in games in which he was taken off for a breather.

Don emailed us and, with a nod to how things used to be in past decades, said: “There were no substitutes earning a cap for a few minutes at the end of the match then, no ageing players included in the knowledge that they could be replaced when they tired and no friendly matches that included second-string players.

“Possibles were tried out in inter-League matches, provided the Football League and the FA were on good terms, which wasn’t always the case. There were also fewer international matches played in those days.”

Don, a keen and expert statistician on whom we have leaned several times in the past, went on to say he had done a little ‘adjustment’ work to try to realistically compare the caps won by the greats of yesteryear with those picked up in the modern era.

“A few years ago, I set up a calculation to discover how many caps players would have won if there had always been the same number of matches,” he added.

“I settled on ten matches per season and assigned matches proportionally, so, if a player played in half the international games in a season, he would be credited with five caps.

“I also allowed players to ‘claim’ a cap even if they were substitutes. Giving then half a cap actually made little difference to the top figures. I also assume a cap for every match played, although only one was awarded for all three international championship matches in a season until after the war.”

So here is how Don feels the order at the top of the England appearance-makers list would look under his special conditions (with the actual placings for the leading group and number of caps won in brackets): 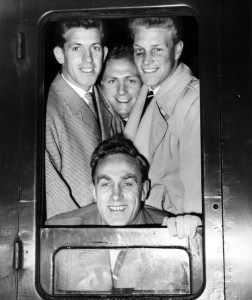 So our massive admiration for Billy Wright might even need to be a bit greater still!