Wednesday, August 2: How curious it feels to have been talking in the last few days to no fewer than four men who have worked in the physiotherapy department at Wolves in the last 25 years! First it was by phone with Barry Holmes, then by text and email with Gavin Blackwell, who still helps out in the academy at Compton as well as switching this summer from being the regular physio at Hednesford to the same role at Halesowen. The briefest of pavement meetings followed with Paul Darby, then we had several email exchanges with Kevin O’Leary, assistant to Holmes around the turn of the century before going off in Colin Lee’s wake to Walsall and more recently to New Zealand, where he still lives and works.

Saturday, August 5: A heart-warming as well as successful first day of the Championship season as the goodwill to Carl Ikeme was carried over into a 1-0 victory over relegated Middlesbrough at a packed Molineux this afternoon. Another 45 of those will do nicely!

Tuesday, August 8: Saw Scott Wagstaffe on his pitch on the Stan Cullis Stand car park in the hours leading up to Wolves’ Carabou Cup home tie against Yeovil tonight. Can’t believe that it was on League Cup first-round night four years ago that we heard the news about his dad that upset us all.

Monday, August 14: Spoke to John Farley at the request of the Blackpool Former Players Association and learned that he definitely won’t be present when Wolves visit his home city tomorrow night. He described himself as disillusioned with the modern game and now prefers rugby, as well as staying fit after receiving two replacement knees by getting out on his bike.

Saturday, August 19: Already this season we have had Everton scout Jim Barron in our midst in and around the press box area, plus Andy Thompson on radio summarising duty of course. On the occasion of Cardiff’s win at Molineux this afternoon, we had a bearded Iwan Roberts among us.

Wednesday, August 23: Have enjoyed making plans to support the fund-raising dinner being attended in the early autumn by Dave Thomas in aid of Guide Dogs For The Blind. The show of support from others unable to be present on the night has been heartening, too…..more details to follow.

Thursday, August 31: Dropped in at Molineux briefly – strictly NOT on deadline day business – and then had a quick coffee with Richard Skirrow after the realisation that we were both in the city. 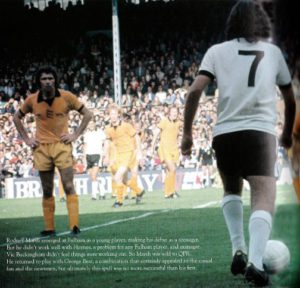 Saturday, September 2: Loved seeing a photo of Bobby Gould in the Fulham version of the Daily Mirror’s outstanding When Football Was Football series of books. It was taken during the 0-0 draw achieved by Sammy Chung’s side at Craven Cottage early in their Second Division title-winning campaign of 1976-77 and shows the forward looking on, unimpressed, at the takers of a home free-kick – George Best and Rodney Marsh, no less!