Gray Days And Other Dazzling Debuts

A Month In Which To Marvel 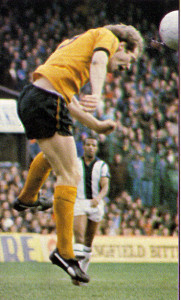 Andy Gray, pictured in a derby clash at Albion, wasted no time in endearing himself to the Molineux masses.

This is very much anniversary time for some of the more dramatic debuts there have been in Wolves’ forward line over the decades.

It was on the second Saturday of September 38 years ago that the club shattered the British transfer record by signing Andy Gray on the Molineux pitch before a home game with Crystal Palace.

And the Scottish striker made an immediate impact by scoring one of the goals in the 3-2 win at Everton a week later – a debut he followed by netting in the victory over Manchester United in his first home game and then promptly hitting a brace against Arsenal in another 3-2 away win.

Gray was to become a Wembley match-winner in gold and black within months and probably had no concept of the importance of another Palace trip to Molineux early in 1966-67.

Dave Burnside was famously listed in the programme in the visitors line-up, only to be transferred to Wolves shortly before the match and to appear instead in the home team.

Even more remarkably, the Bristolian inside-forward scored in the opening seconds of that September 7 match in the old Division Two and admitted he found it difficult to celebrate.

We should not overlook, either, the fact that it was in this calendar month that Ted Farmer burst into the first-team spotlight.

The proud West Midlander was handed a game against Manchester United for his big introduction and responded by hitting a match-winning brace.

The excitement he caused in a memorable 3-1 success at Old Trafford kick-started a remarkable first season for him in the side.

He found the net no fewer than 28 times in the top flight – a record made even more astounding by the fact his debut wasn’t until September 24 and then he missed the final five games of the campaign through injury.

Inevitably, not all entrances are as grand, as illustrated by that of Ade Akinbiyi the best part of two decades ago.

The former Bristol City centre-forward was another September debutant after becoming a Molineux club record signing at £3.5m but started slowly before he, too, made a good impression here.

* Hugh McIlmoyle is due to be an on-field guest on Tuesday night at the Molineux meeting of two of his former clubs, Wolves and Bristol City.