Scary – But All Is Fine For Shaun 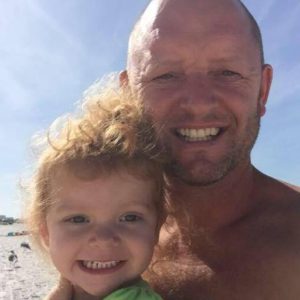 Memories of a Wolves home win over Millwall are still fresh, so this seems an opportune time to report the good news that Shaun Bradbury and his family emerged unscathed from the Hurricane Irma ordeal.

It was against the Londoners in 1993 that the teenage Bradbury made a stunning League debut by scoring twice on the Saturday on which Molineux’s massive South Bank terrace was used for the final time.

Now 43, he lives with wife Julie and three-year-old daughter Brooke in Florida, where he runs a jewellery business in Clearwater Beach, a few miles west of Tampa.

Among the concerned friends who sent ‘stay safe’ messages on Facebook a week or so ago were another former Molineux youngster, Andrew Harnett.

In the countdown to the hurricane cutting a frightening swathe through the Sunshine State, Bradbury posted an idyllic ‘calm before the storm’ photograph of the nearby ocean and reported: “We’ve got beer and food, and power at the moment. Hopefully staying safe!”

The family opted against evacuation, choosing to trust that the odds were in their favour by battening down the hatches in their fourth-floor condominium and waiting for events to unfold. And they reported afterwards: “Thanks to everyone for checking on us all. We are fine, our home is fine and also our business.

“It was a scary experience – not one we would like to repeat – but Clearwater Beach was very lucky and all the people we have met here have been amazing.

“They really have shown us so much support. We have great friends and neighbours in this area, which we love so much and are so glad to see it still beautiful.

“We dodged a bullet. There was damage, with trees down, lamp posts flattened and a lot of external damage to houses, including metal car ports ripped apart.

“We were in a mandatory evacuation area but chose to stay put. It was scary and we feared our windows may break but we got through with little damage and our business was undamaged, too.

“Some people are still without power and air conditioning, which is a problem here. My wife is a teacher and schools have been closed but, hopefully, they are reopening on Monday.” 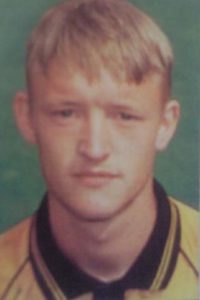 At Wolves around 25 years ago.

Shaun was brought up in Telford from the age of three, although born in Birmingham a few weeks before Wolves’ 1974 League Cup final triumph. He attended Abraham Darby School and came to the attention of those at Molineux in the late 1980s.

He first appeared at senior level for the club in a League Cup second leg at Shrewsbury on October, 1991 and had a dream League debut 18 months later against Millwall – last Saturday’s visitors to Molineux – by scoring twice in a 3-1 victory.

He also started the following weekend’s game at Derby but wasn’t chosen again for Wolves’ first team, nor did he make any appearances after being transferred to Hereford in 1994 following a loan spell at Telford.

He had a prolific career in non-League, though, primarily in a six-year stint as a semi-pro with Chasetown, and also served Shifnal, Bridgnorth and Blakenall.

We first made contact with Shaun last winter after he had read our obituary of Rachael Heyhoe Flint – a popular character he remembers fondly from his time at Molineux.

He told us then: “We relocated to Florida in March last year to start a new business on Clearwater Beach – going well so far, but early days.”

We trust that the quiet days which have accompanied and followed the recent mass evacuation of local homes and hotels will now give way to good business again over the coming weeks. 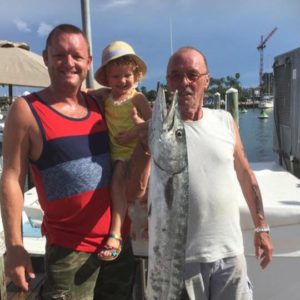 A family ‘team photo’ emphasising some of Florida’s attractions.

And no-one can say that the family were stepping into the unknown when they emigrated on St Patrick’s Day, 2016 after he had previously worked as a carpenter, both in Chasetown and at Jaguar’s engine plant on the M54. Shaun and Julie had holidayed in Florida virtually every year for a decade and a half.

“We just decided to move out here and see if we could make it work,” he added. “Ironically, when I was a carpenter, I spent some of my time working on restoring fire and flood-damaged properties!”