Popular TV Show That Lit Up Our Living Rooms

Fingers on buzzers……Wolves v Arsenal with a difference.

John Holsgrove has delved into his old scrapbooks to remind us of the part he played in a long-running 1960s TV panel show that was loved by football fans the country over.

Quiz Ball was on our screens for six years from around the time of England’s World Cup triumph, although Wolves’ part in it was modest in the extreme.

Some time ago, John recalled to us how he had lined up alongside Dave Wagstaffe and manager Ronnie Allen in the four-man team, not remembering then that the line-up was completed by renowned football writer Geoffrey Green.

Now he has produced some pictorial evidence of the occasion, from the Sporting Star we believe, in the form of a cutting also showing the Arsenal side whose members are named as Ian Ure, George Jackson, manager Bertie Mee and radio presenter Jimmy Young.

“We must have lost because I can only remember doing the one show,” Holsgrove tells us. “I think our run in the competition was brief. But I was glad to find this record of our little piece of history.”

This particular show was filmed by the BBC at the Wolves Social Club in Waterloo Road – also the setting for the This Is Your Life spectacular featuring Emlyn Hughes in 1980.

All questions were based on general knowledge and a right answer that was given to a gentle opening teaser opened up the way to goal, with the contestant then able to go for route one, route two, route three or route four.

An illuminated miniature pitch displayed his choice, with route one bringing a single very difficult question and route four, for example, containing a quartet of much easier ones. If it or they were correctly answered, a goal was scored.

What the show did achieve was to allow some access to the players for supporters, who were completely unfamiliar in the 1960s with seeing and hearing their heroes talking on television. 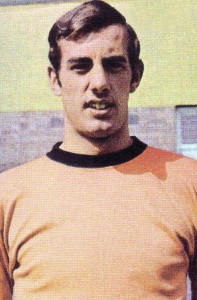 John Holsgrove as he is better remembered.

One surviving clip from the show captures Ted Moult puffing on his pipe as presenter David Vine introduces the rival Forest and Arsenal team members, with John Barnwell sat next to the TV and radio personality, closest to the plume of smoke.

Holsgrove also had recollections of Derek Dougan having appeared in a Wolves Quiz Ball team – do any of our readers recall the club being represented in a second series?