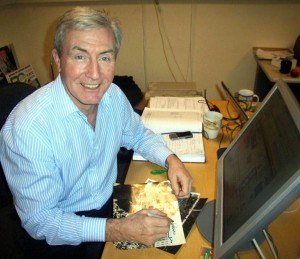 Signing time and happy to do a favour – John Richards.

Wednesday, September 6: Wolves Heroes co-owner John Richards turned good Samaritan after reading in the Express & Star about a Wolves fan who had lost many of his personal possessions in the floods in Texas that followed Hurricane Harvey. Clive Hill, 65, was relieved his Steve Bull memorabilia had survived but distraught that he had lost his only signed photo of the man 1970s Wanderers fans knew as ‘King John’. JR quickly organised a replacement keepsake or two and made plans to have them flown to America.

Saturday, September 9: Great to see Andy Thompson and Mark Burke nattering away in the press box before this afternoon’s victory against Millwall. They were team-mates in the early 1990s, since when their paths have taken very different directions. Mark is still part-based in Holland but continues to scout for Middlesbrough despite the round-about journey that has now taken his long-time friends Tony Mowbray and Mark Venus to Blackburn.

Monday, September 11: Interviewed Steve Ogrizovic for Backpass at Coventry’s Ryton training ground and was reminded of his links to various former Wolves figures. He was taken to the Sky Blues in 1984 by Bobby Gould and, as well as being grateful for the top-flight opportunity offered, spoke very well of Graham Turner – his manager at a Second Division Shrewsbury for the previous two years. He was also a team-mate of unused substitute Steve Sedgley in the 1987 FA Cup final win over Tottenham.

Saturday, September 16: Heard on radio that Geoff Thomas was given a great reception on the pitch at Crystal Palace this afternoon following his latest epic cycle ride in aid of Cure Leukaemia. What an inspiration he is! A true legend.

Tuesday, September 19: For Bristol Rovers’ first visit to Molineux in nearly a quarter of a century, Paul Jones was this time around the press box tonight as company for Thommo. As part of our half-time entertainment, we had the sight of Steve Daley interviewing Geoff Palmer – and inevitably not missing the chance to take the mick.

Friday, September 22: Have enjoyed bumping into Fred Kemp and John Southall on early-season visits to Molineux. Fred and his wife attend matches when possible around their love of sunshine holidays abroad while John, an early-1960s Wolves reserve, watches every home game from the Billy Wright Stand despite living for the last year or two in Shrewsbury. That latter arrangement leaves the former full-back more than a little interested in current goings-on at the top of League One.

Saturday, September 23: Steve Daley continues to pull ’em in as part of his pitch-side match-day duties at Molineux. We have also seen Paul Butler and Hugh McIlmoyle interviewed by him this season – at today’s dramatic win over Barnsley, it was the turn of Bully to do a few minutes at the mic.

Monday, September 25: Have been digesting an interesting follow-up to the story we posted yesterday about Wolves’ fortunes in Quiz Ball. David Sims, a Stan Cullis Stand season ticket holder despite living 100 miles away, wrote to say: “I loved Quiz Ball – and have a memory of being a nine-year-old in 1967 and watching the programme as Derek Dougan appeared for Leicester. My dad came in from work that evening with the London Evening News, which said we had signed The Doog, who I loved. I was ecstatic.” David also has recollections of Lady Isobel Barnett sitting alongside the centre-forward as Leicester’s celebrity guest.

Thursday, September 28: Was staggered to bump into John McAlle in the dining room of a Dorset hotel this morning. Even more so when we learned he and his wife Jill had been there for two days without our knowing and were staying in the very next room! Oh well, dog owners tend to be allocated sleeping quarters near each other in such establishments.