Dave Retraces His Unhappy Wolves Steps In The Best Of Causes 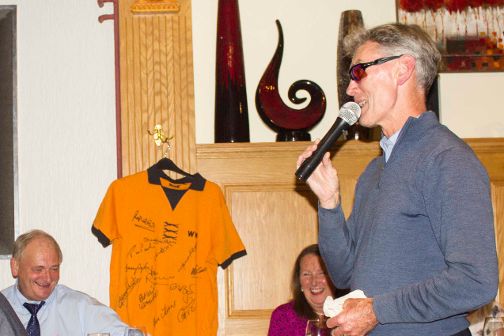 Emotional moments at the mic for Dave Thomas, watched by wife Brenda and Steve Kindon. Dinner photos have been kindly provided by Tom Bunce.

Charity fund-raising dinner in his honour or not, Dave Thomas was piercingly honest. “I hated my time at Wolves,” he said. “It was a horrible period for me.”

It wasn’t the usual opening gambit from a VIP guest at a function through which giant waves of gold and black nostalgia washed, even if this gathering was at the lovely Red Lion Hotel at Bobbington, half an hour from Molineux.

We at Wolves Heroes work hard to sidestep controversies on these pages and to instead celebrate the club’s famous past. It would be misrepresenting the mood of last night’s sell-out occasion in the sticks towards Stourbridge, though, to try to pretend the main man had been happy in his year or two among us almost four decades ago.

We have quoted him before as saying that he clashed with John Barnwell’s assistant, Richie Barker, over his decision to wear rubber-soled footwear, with his socks rolled down. Now, at a time when he is in the public spotlight during his battle to cope with the onset of blindness, we can go a little further…..

“I didn’t like the way he was sarcastic about me in front of the other players if I went down in a game,” he added. “Barnwell said things as well.

“The soles I preferred were okay with Sir Alf Ramsey, Don Revie and Dave Sexton but apparently not here and it became an issue.

“I had chosen Wolves because they were a team on the up and were flying near the top of the First Division. Dave Sexton, who I had loved playing for at QPR, was at Manchester United by then and wanted me to go there but I thought this was the better move; joining a really compact team with big new signings like Andy Gray and Emlyn Hughes.”

John Lalley – always a forthright and thought-provoking voice when writing his fan articles in the Express & Star – was at my side last night and recalled Thomas hitting a screamer into the opposition net from 25 yards at Molineux. There was a collective sigh of relief that at last he had settled down after his move from Everton and things were clicking, only for the goal to be disallowed and the frustration to mount.

Starting in a 0-0 home draw against Derby 38 years ago next week, the left-winger played 15 first-team Wolves games, including four in the victorious League Cup journey of 1979-80. 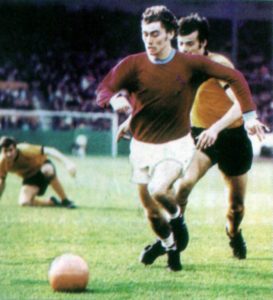 Dave Thomas playing for Burnley against Wolves at Turf Moor.

His involvement in that run stretched as far as the away leg of the semi-final against Swindon and he added: “I was measured up for a suit for the final and my wife got herself a new outfit but we didn’t go to Wembley.

“I had played there for England and didn’t feel part of the Wolves set-up by then. They had me training with the kids and I checked out of the Mount Hotel and went back to Parbold, near Wigan, where we lived while I played for Everton.

“I drove down every day and made sure I remained very professional and ensured I was never late once.”

We have said before but there was and still is a real bond about the 1970s Wolves. Steve Kindon was the boisterous master of ceremonies last night and has been deeply touched by the plight of a team-mate from the Burnley side who won the FA Youth Cup in 1967-68 who now finds himself relying on a guide dog.

That sympathy doesn’t spare Thomas some public ribbing from the man known affectionately as The Tank, who, in turn, reckoned he only had to mention the case to John Richards – a close friend since they met in Warrington sporting circles at the age of eight – to see to it that the tickets started flying out.

Dave doesn’t remember meeting John McAlle or Richards since leaving Wolves in 1981. He has stayed in close touch with Norman Bell, though, and was seated two places along from him on the top table.

Daley, like Kindo, unleashed his award-winning after-dinner repertoire, full-on, familiar and funny. The two then shared auction duties and helped push the evening’s proceeds up to £3,600.

Sadly, for Thomas, Wolves proved the one blot on a wonderful career that had been launched at the end of 1966-67 by his feat in becoming, at the age of 16, Burnley’s youngest ever player in the top flight.

And the escape route that eventually presented itself to him brought another knock-on aspect to the dialogue after the dinner plates had been cleared. Vancouver Whitecaps were the winger’s next port of call and it was there he struck up a firm friendship with Les Wilson, a huge supporter of this website.

Les emailed us at length after hearing of the fund-raising effort and spoke of his enormous liking for Dave, whose professionalism in the North American Soccer League he so greatly admired.

“My respect for him is of the highest order on and off the field,” Wilson wrote. “I had the honour of playing against him several times and even marking him when I was at Wolves and got to know him very well when he was in Vancouver. Because he didn’t fancy living in a hotel, I placed him in digs here with the Mazzucco family (Ralph Mazzucco scored the last goal in the Whitecaps’ NASL history, in 1983) and I know the two families are still in close touch.”

Thomas, who had his wife, Brenda, and loyal labrador, Hannah, at his side, as well as friends from Shifnal, was understandably choked when bringing proceedings to an end and was particularly touched to hear that the Wilsons had donated £120 by international post via Wolves Heroes. He was also thrilled when we promised to put the two of them back in phone contact this weekend.

“Ralph Mazzucco became one of the top photographers in the USA and Canada in fashion, art and music and we went over to spend time with his family last year,” Thomas added. “It will be wonderful to speak to Les again…..he is a tremendous guy.” 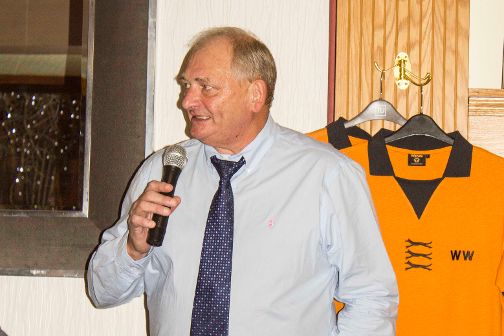 Kindo is with Dave for another fund-raiser next week in Chester-le-Street, not far from where the Thomases now live, then Burnley are staging a dinner for around 350 at Turf Moor next May to mark the 50th anniversary of their Youth Cup glory. The club are subsidising the occasion, so guests pay only £19.68 in commemoration of the year of their two-leg final victory over Coventry.

With that, we were left to wonder if and when Dave will be back in these parts. Glaucoma is blighting his life but he still plays golf well, looks gym-honed and has lots of interest to say even if, despite the winning of eight international caps, he didn’t make any mention of the fact England were ensuring World Cup finals qualification as we socialised.

He clearly has no time for Sam Allardyce and the morals of some others in the money-driven modern game but, of his condition, says: “I don’t get down and always remain positive.” How else could he already have raised £55,000 or so in the name of Guide Dogs For The Blind.

* Approaching 20 former Wolves players are due at the tribute night to Derek Parkin at Molineux this evening.