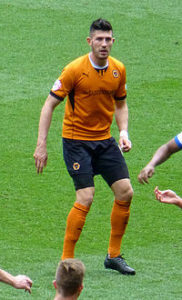 Danny Batth has joined the exclusive Legends area of Wolves Heroes by going past the 200-game mark with his local club.

The Molineux skipper has reached the landmark during his recent return to the Championship starting 11 and takes his place at no 83 in the list.

He so becomes the first player to be added to this section of the site since Carl Ikeme late last winter.

We very much look forward to seeing the popular keeper’s appearance tally starting to click over again some time next year and for the two West Midlanders to enjoy their own personal battle in the race for further outings.

Interestingly, Batth has taken only seven years after his debut – in a League Cup home victory over Southend – to reach the milestone.

His team-mate, perhaps reflecting the lot of a goalkeeper, needed 11 and a half seasons to register the same total.

Two of the pair’s high-achieving colleagues, Richard Stearman and Dave Edwards, have left Molineux in recent months after making their own sizeable marks on latter-day club history.

Stearman played 254 times for Wolves before returning on loan to Fulham at the end of last season – and subsequently signing for Sheffield United.

Edwards improved considerably on that figure, making the last of his 306 Wanderers appearances in the opening-day victory against Middlesbrough this season.

The midfielder has since moved on to Reading and has played five games to date in new colours while Stearman has managed only three, the latest of those a full two months ago, while at Bramall Lane.

Matt Doherty – next man in?

It might not be too long before we are adjusting our records again, Matt Doherty having already accelerated this term from 160 Wolves outings to 172.

And the full-back has a claim to fame that Stearman shares. Both appear among the past winners in the Player of the Year (P.O.T.Y.) section we unveiled on here a few weeks ago.