The Ground Has Changed, Son, But This Is Where Your Dad Used To Play 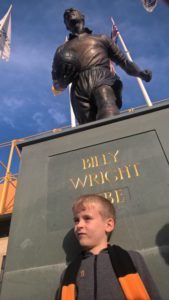 Matt Forman has used an epic televised meeting of his two former League clubs to make a first match-day visit to Molineux for well over two decades.

The former midfielder had been intent on attending a Wolves home game ever since contacting us out of the blue by email a couple of years ago and explaining that there was still plenty of gold and black running through his veins.

This despite the fact he now lives and teaches in Manchester and has kids bearing a love for the blue half of that city.

“I hadn’t seen a game at Wolves since the mid-1990s,” he said this afternoon. “A good few seasons after I left the club, I played against them in a friendly at Bromsgrove and saw Tom Bennett for the first time since I was released by Villa in 1986.

“He said I should go along to a game at Molineux and sorted me a ticket for when Sunderland were there towards the end of a season.

“But being there last Saturday was brilliant. It would have been nice to see one or two of my team-mates from the second half of the 1980s but we did at least sit in the Steve Bull Stand!”

Forman’s determination to retrace old tracks was heightened by his presence at the dinner last November to celebrate the 30th anniversary of Bully’s signing from Albion.

And it seems the re-connection isn’t going to end at the victory that sent Wolves to the Championship summit.

“We are going to see if we can make another game next month,” Matt added. “Our seven-year-old son, Archie, was with me and we had a great time. It was a terrific game because Wolves played some really impressive stuff and the atmosphere was electric. Bully’s stand was bouncing! 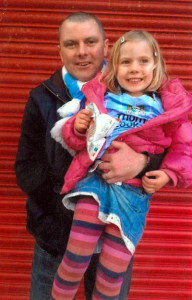 Matt showing support a few years ago with daughter Lottie for Wolves’ next cup rivals.

The timing of the trip was also poignant as the funeral of one of Matt’s good Wolves-supporting friends from Kidderminster took place last week, complete with flowers arranged in the shape and colour of two huge club badges.

Forman can not contemplate attending next week’s Carabao Cup tie at Manchester City because of a half-term visit to Ireland.