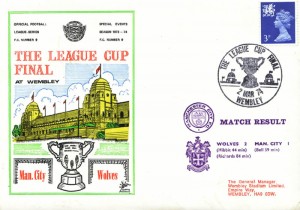 A keepsake of a wonderful day out.

We waited and wondered…….would the Manchester City programme for tonight’s visit of Wolves draw a diplomatic veil over the most famous all-time meeting of these two clubs?

Ok, we didn’t expect a glossy pull-out, nor pictures of the 1974 Wembley thriller popping out from various pages. But it could have been blanked totally.

To their credit, though, the Premier League leaders did not attempt to air-brush the occasion from the record books and gave a nod to it in their 68-page match-night publication.

Among the pages devoted to Wolves, they referred in the text to the epic 2-1 victory by Bill McGarry’s side the small matter of 43 and a half years ago.

And, perhaps over and beyond the call of sporting duty, they also presented a double-page spread of one of the game’s big moments – inevitably the equaliser drilled home by Colin Bell early in the second half!

“We were 1-0 down at half-time but I always felt if we pulled one back, we would win,” the former City and England midfielder was quoted as saying in the brief caption story.

“I got the equaliser and we were never out of their half after that. Then, late on, a ball was played across our area, Rodney Marsh just got a toe to it and helped it in the direction of John Richards, who scored the Wolves winner.”

This evening’s Carabao Cup fourth-round clash was not the first meeting of the clubs in the competition since Wembley. 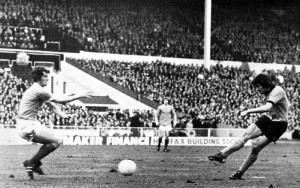 For their interview with a man who has played for both clubs, the programme compilers turned to Paul Simpson, who reflected fondly on his time at Molineux in the late 1990s.

“We reached the FA Cup semi-final and lost to Arsenal – that was the furthest I ever got in it,” he said. “I really enjoyed my time there.”