Motty: Wolves And Me

Legendary Commentator On His Molineux Memories 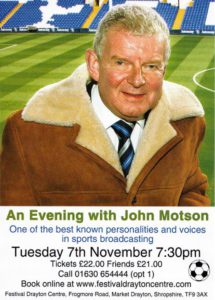 John Motson has been to ten World Cups, visited 49 countries for England matches alone – “they wouldn’t let me complete my 50 by going to Lithuania” – and has announced that his current 50th year with the BBC will be his last.

We secured an exclusive interview on his appearance at the lovely Festival theatre in Market Drayton last night and asked him for his memories of covering Wolves matches and events among the thousands of engagements that have made him one of British sport’s most famous broadcasters.

We were pleasantly surprised at the outcome, although he apologised more than once for what he felt were hazy or even inadequate recollections.

“Every time I open one of our cupboards at home, I am reminded of Wolves because I have six champagne glasses that were presented to me by Rachael Heyhoe Flint as a thank-you for interviewing Sir Jack Hayward at a dinner,” the OBE recipient said.

“We still drink out of them and many of my memories of Molineux are centred around how the stadium has changed from when the outside doors of the dressing room used to open out on to the street.

“My first match there would have been in 1972, no doubt with John Richards and Derek Dougan up front – and Munro and McAlle at the back?

“I was in a radio studio at Broadcasting House in Portland Place on the night of the Wolves v Leeds title decider and again when Liverpool won at Molineux in 1976 to secure the championship. I recall QPR thinking they were going to win it that year and just missing out.

“The ground has changed so much, of course. I met Derek Dougan many times, mostly when he was helping run the club in the 1980s, and was at the game in 1982 when they beat Blackburn in their first game after coming out of receivership and Mel Eves was the hero.

“Then the main stand was condemned a few years later and there were only a handful of people in it for one match I commentated on there. One of those was Graham Turner, who used it as a high vantage point.

“By the time I went back for Premier League matches, Sir Jack had rebuilt the ground, God bless him, and no longer was that stand on the far side so far from the pitch.”

Motson was mischievously introduced on to the stage by ‘Stokie’ Nick Hancock as ‘half man, half coat’ and wore his trademark sheepskin for part of his act. Both before and after the show, he happily mingled with autograph and ‘selfie’ seekers, having recalled privately that one of his early outings as an emerging BBC voice was to the 1973 FA Cup semi-final at Maine Road.

“I was told to sit at David Coleman’s side,” he added. “He was my mentor and had strong connections with Wolverhampton, as your readers will know.

“Billy Bremner won it for Leeds quite late on and, a year or two earlier, I had been standing in the foyer of Highbury after a Wolves game against Arsenal and been given a right shellacking by Bill McGarry for daring to try to fix an interview with the young John Richards!”

There were surprises, too, in our chat before his appearance in front of an audience of almost 150; not least when Richie Barker, a Market Drayton resident, appeared in our midst before the show to reacquaint himself with an old friend he knew while at Shrewsbury, Wolves, Stoke and during Sheffield Wednesday’s cup final days of the early 1990s. 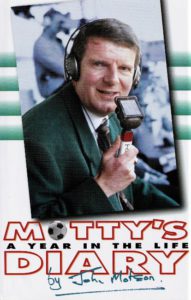 An exponent of the written word as well…this tome dates back more than 20 years.

We had no idea the Motsons were family friends with Mick McCarthy and his wife – a closeness dating back to his time with Millwall more than 20 years ago and cemented by the manager’s considerable successes with the Republic of Ireland.

“I was pleased Mick had those seasons in the Premier League with Wolves,” he added. “I knew Glenn Hoddle as well, of course, and Graham Taylor also. Elton John was not able to get back for Graham’s funeral, so I read out the words he had written.

“I also spent a couple of weeks at Lilleshall in 1973, doing my preliminary coaching badge and having Norman Bodell – one of Bill McGarry’s coaches from Wolves – as my instructor.”