Where Football And Showbiz Meet 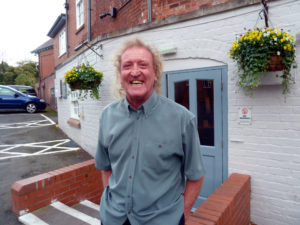 Kenny Craig in Tettenhall this autumn.

Kenny Craig has strummed away with any number of musicians who wish they could have made it as footballers.

Equally, he has befriended Wolves players who envy him his lifelong talent as a professional guitarist and vocalist and is grateful to have blended in for so long with both factions.

We vowed to get to know the Tipton-born, Sedgley-based entertainer better and in happier circumstances after meeting him at a Wolves funeral or two, most recently that of Graham Hawkins just over 12 months ago.

Here is a man with a more than decent story to tell; one that might be confined to the fringes of both our national sport and the mainstream showbiz circuit but which nevertheless contains memorable acquaintances with big hitters from the two worlds.

We eventually met over coffee on a match-day. The day of an away game, that is, and the 90 minutes before he went off and prepared to take to the stage at a 70th birthday bash in Wednesbury proved just about enough to acquire the flavour of a hugely enjoyable career in the spotlight.

Care homes also feature regularly on his schedule these days, but so, since the early 1980s, have annual working trips to Malta, also to Lanzarote and Tenerife. He has also had small acting parts in Crossroads, Boon and Soldier Soldier.

“I have always been an entertainer,” he says. “I used to be in a group called Revival and we would play West Bromwich Baths from 8 to 8.30pm on a Saturday and then get ready to go over to The Oakley at Brewood, where several of the Wolves lads would be in attendance.

“I’m not great on remembering dates or even eras but it was the 1970s because Mike Bailey was living in the local villages then and John Richards, Phil Parkes, Frank Munro, Kenny Hibbitt, Willie Carr, Geoff Palmer and Derek Parkin are among the others I recall seeing there.

“Our roadie would pack up the gear to transport it over and the owner of the Oakley, Frank Gibb, would let us have a sandwich in an upstairs room while we watched Match of the Day before doing our turn from about 11.15 to midnight. Malcolm Allison came to see us one night when he was at Lilleshall.”

Kenny is close enough to the Molineux family to be a Godparent to Phil Parkes’ son, Greg, and to have spoken on behalf of the family at the funeral of Lofty’s wife, Maureen, several years ago.

This friendship might have had its roots in Wolverhampton but it was cemented in faraway Vancouver when the popular keeper was bringing his long professional career towards a close with his successful years in Canada and America.

“I went out to stay with the Parkeses for a month when he was playing for the Whitecaps and I had a great time with lads like Bob McNab, Alan Ball, Trevor Whymark, Kevin Hector and Willie Johnston, all of whom I was so used to seeing play for their English clubs,” he added.

“Phil and Maureen lived in the Burnaby district and Bruce Grobbelaar and Carl Valentine were in the next apartment. I used to go for a stroll with Bruce and hear his stories from when he was fighting in the Rhodesian Army.

“He was over there because he couldn’t get a work permit to play in England and he really looked the business. I told Lofty not to lose his place to him because it would be hard winning it back. You could see Bruce was going to be one of the best. 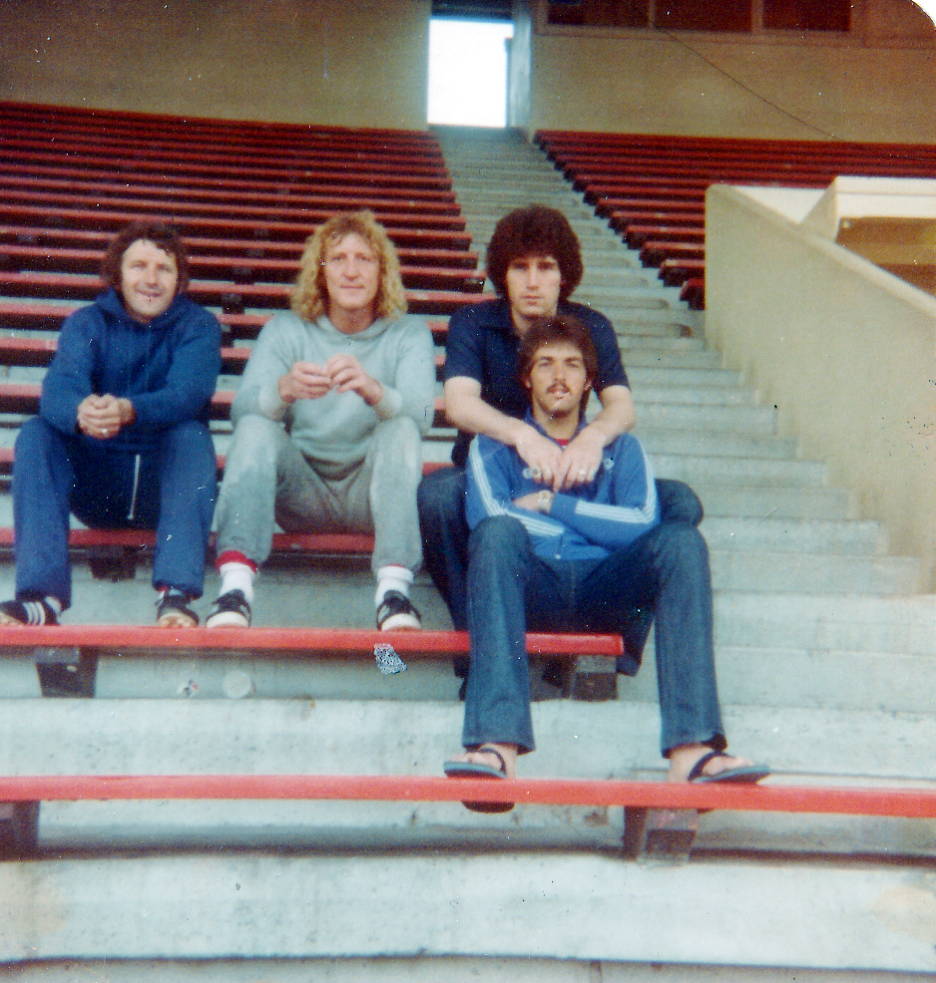 “After he joined Liverpool, he rang to offer me a ticket when they were handed a trip to Wolves on the opening day of the season in the early 1980s.

“Tony Waiters played a part in getting him to Vancouver and was working with Les Wilson, who was extremely good to me. Because I went to watch training every day, Tony threw me a bib and told me to put it on.

“I had reached West Midlands League standard with Tipton Town and could play a bit, so I was absolutely in my element. I also went out with the squad and had a smashing time in their company.

“So much so that I did a couple of nights’ entertaining, just for fun, when we congregated at the Georgian Hotel in the city. I probably gave them my renditions of Unchained Melody and Help Me Make It Through The Night – with some Beatles stuff thrown in, of course.

“It’s amazing how many footballers said they had always wanted to be vocalists. And I know they would have enjoyed being able to play the guitar, which is something I could do from the age of ten.

“When I was in Canada, Greg was only a tot but I stayed in close contact with the family and have been glad to regard them as good friends.”

Music-loving footballers are only part of Kenny Craig’s story. Frustrated would-be players from the pop and rock world are in there, too, thanks in part to him having shared dressing rooms with them at Molineux and even Wembley.

A pop group XI did the rounds for a while and the subject of our interview recalls directing his team-mates, including Jasper Carrott and Bev Bevan – old school friends to each other – to a pub in Penn when they longed for a pint of Banks’s after a match at Wolves.

“Robert Plant was very much part of this scene, so was ELO’s Jeff Lynne but none of the members of Slade were into their football,” Kenny tells me. “There was still no shortage of volunteers for celebrity games at Molineux, though.

“Our matches were often support events to a player’s testimonial game and for one involving the Tiswas XI, Chris Tarrant turned out, so did Gary Newbon and Trevor East, who was a handy player.

“Terry Thomas, the tubby ATV angling expert, was in goal with a huge keep-net on the end of a pole! We also each had a custard pie in the face from the Phantom Flan Flinger!

“I might be confusing different occasions but I also recall Rick Wakeman and Roy Wood being there and Roy sending his roadie for a bottle of Scotch from The Goalpost. It was a cold night and he topped our paper cups up before we went out – just as Bill McGarry walked in and wondered what the heck was going on!

“In one of the main matches, Wolves were playing an England team who had Bobby Moore and George Best as guests. There were only two dressing rooms, so there we were changing among these legends and Kevin Keegan and Ray Clemence.

“There were 25,000 there once, partly because Tiswas was a big show at the time and obviously the local youngsters had badgered their parents to take them.

“I saw George and Bobby in the players’ lounge afterwards, smartly dressed and drinking coffee. They asked me whether I had enjoyed the experience…..you bet I did! It was my cup final.

“Our games were only 15 minutes each way but I ran out and wondered how any player could EVER not feel motivated. It was such a thrill for me to play there.

“I played like my life depended on it and was disappointed to have my kick saved by Tim Flowers when there was a penalty shoot-out at John Richards’ testimonial.”

Craig regards himself as lucky to have felt respected for being able to sing – and to play football to a reasonable standard. In other words, he wasn’t in awe of those around him. 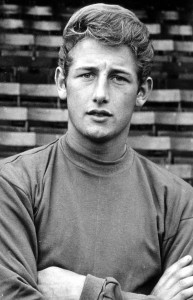 Jim Barron…..a good pal, even when he was at Villa.

His links in the game are by no means restricted to Molineux. As a 12-year-old in Tipton, he had an exchange of letters with Bobby Robson – then at Albion – and his friendship with Jim Barron meant he watched plenty of Villa games in the early 1990s after the former Molineux keeper succeeded Andy Gray as Ron Atkinson’s assistant. But there has been a strong pull to Wolverhampton.

“We went to the Civic for a banquet after one of the games and Jasper did a spot on stage,” he added. “Bev Bevan asked if I fancied playing in an indoor tournament at Wembley Pool, which is where I think Wolves had done well in a five-a-side championship in the 1970s. I didn’t need any persuading.

“There was a tie-up with The Sun and our mascot was Britt Ekland, who hadn’t long split from Rod Stewart and who kept calling me ‘Kent’. We went down there by train and then had a Limousine to take us to Wembley.

“I remember explaining the rules about head height and legal use of the surrounding boards to one or two team-mates. But not everyone played to the same rules……The Stranglers’ goalkeeper wore a trench coat which he used to trap the ball between his legs!

“Our manager was Don Arden, who was also the father of Sharon Osbourne and manager of ELO. It was Bonfire Night and we went back afterwards to his spectacular place in Wimbledon, which had huge chandeliers, ELO in marble on the floor, a tiger skin rug and even a roulette wheel.

“Finally, they flung open the windows and we were treated to a magnificent fireworks display. It was all a bit surreal.

“We dropped Jeff Lynne off at his hotel and then it was decided there would be no train trips back to Birmingham……the Limo would take us. So there we were at Watford Gap at three in the morning, parking this wonderful six-door vehicle near some articulated lorries while we popped in for coffee.”

Among others Kenny has met while playing in celebrity matches are George Michael, Andrew Ridgeley, Pepsi and Shirlie and actors Dennis Waterman and Jess Conrad. But we can look much closer to home for a big character who played a sizeable part in his earlier life.

Derek Dougan not only invited him to play in a Year of the Child match at Molineux but also asked him to manage a side in another charity fixture, this time at Albion.

Derek Dougan…..came to the rescue with an important mercy mission.

“Laurie Cunningham and a couple of Manchester United players were involved and Derek was always good to me,” Craig adds.

“I was involved with him on the Duncan Edwards Appeal and developed a polyp on my vocal chords when I was in Malta. A lot of vocalists suffer from them.

“In two days, Derek had me into Russells Hall Hospital and, within three days, I had my operation. Without my connection with him, the operation could have been much later and may not have been successful.”