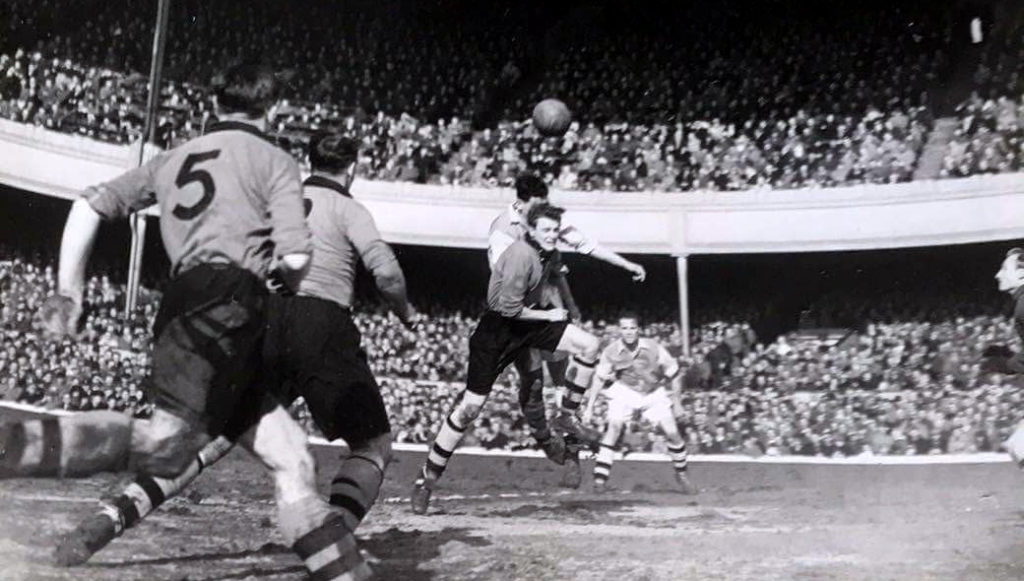 Eddie Russell challenges in the air at Arsenal, covered by no 5 Bill Shorthouse and a half-hidden Angus McLean.

Eddie Russell, a late 1940s Wolves wing-half partner and occasional stand-in for Billy Wright, has died in a care home in Cornwall.

We have been contacted with the sad news by one of the sons of the 89-year-old, who also played for Middlesbrough, Leicester and Notts County.

Lincolnshire-born Russell, no relation to the less-used and younger Peter Russell, who also included County among his clubs, was signed at 18 in 1946 after previously playing in the town for St Chad’s.

He was in the shadow of the two Billys, Crook and Wright, for more than two years before being handed his first-team debut in a 3-1 First Division defeat at home to Arsenal a few weeks before Wolves played and won the 1949 FA Cup final against Leicester.

That opportunity came along in the absence of Crook, who he also replaced for the final three games of that exciting breakthrough season for the club – a trio of fixtures that were incredibly (by today’s standards, at least) squeezed into the space of four days in early May after the Cup had been won on April 30 with the regular no 4 and 6 in place.

A level of patience was again required in 1949-50, with Russell not selected until the mid-October home draw with Albion at the start of a seven-game run in the side which included replacing Wright in the drawn Charity Shield clash with Portsmouth at Highbury.

His most fruitful season at Molineux was the one that followed, his 17 senior appearances then including both games in the FA Cup quarter-final and both in the semi-final as Stan Cullis’s team overcame Sunderland then lost controversially to their north-east rivals, Newcastle.

Such was his impact in the two wing-half shirts that he earned a place on the ground-breaking end-of-season visit to South Africa, where he played in seven of the 12 tour games. 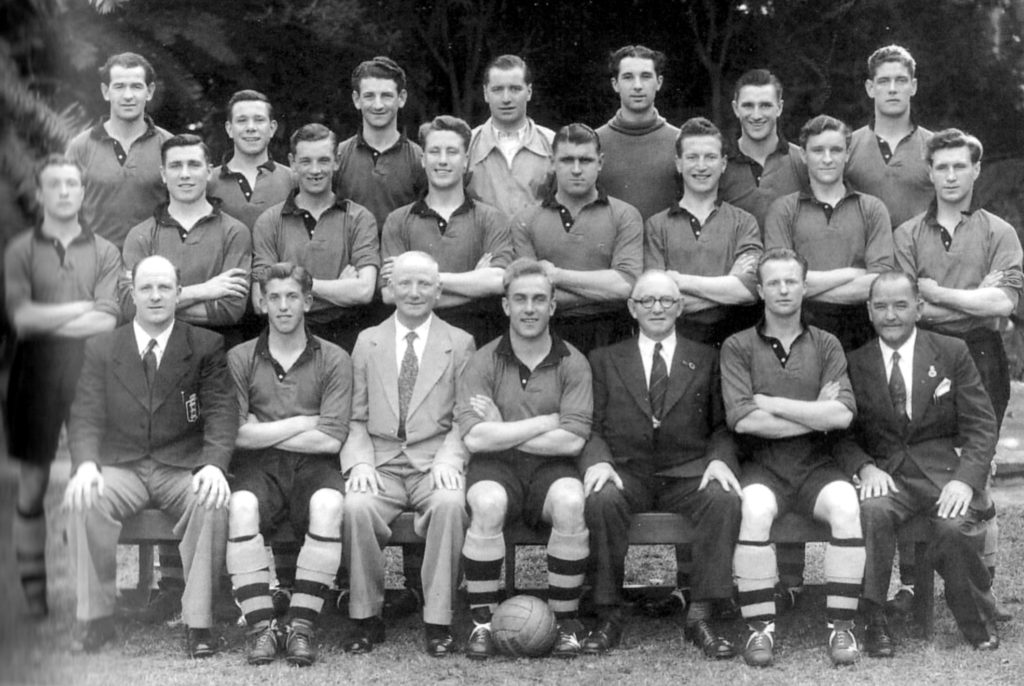 On tour in South Africa with Wolves in 1951….Eddie is one in from the far right on the middle row.

“He loved travelling and did so for the rest of his life, although he never went back to South Africa,” said youngest son David.

“Going there was a formative experience and Dad was very keen that my brother, Paul, should also go to South Africa in the 1980s when, despite being from Leicester, he was named in the Great Britain surfing team for an event in Durban.”

Eddie took a backward step following the squad’s return from the republic, though, and, with Bill Baxter also on the scene, departed to captain Middlesbrough in 1952. He went on to serve Leicester from 1953 to 1958 and was an integral part of their title-winning Second Division side of 1953-54. He also played for Notts County in the 1958-59 season.

What is not clear from the Wolves history books is that South Africa wasn’t his only distant football destination. He was a team-mate of luminaries such as Stanley Matthews and Nat Lofthouse when travelling as part of the FA tour of Canada in 1950.

“Unlike with Wolves to South Africa, the squad sailed and crossed the Atlantic from Liverpool,” David added. “It was no doubt quite an adventure. I spent some time reading about this trip at the FA when they had their headquarters in Lancaster Gate and noted there were some very contrasting results……17-0 against Saskatchewan, for example, but only 3-2 against a team from Vancouver Island.”

After retiring from the game in 1959, Eddie lived in Leicester for around 30 years, working initially as a PE teacher, then developing a successful career in business as a sales representative and company director in the printing industry.

He subsequently returned to life in education as an English teacher and, since 1988, had enjoyed a long and largely healthy and happy retirement in Cornwall despite the loss of his wife of 40 years, Sheila, in 1999. He is survived by his three children and seven grandchildren.

Eddie visited Molineux on several occasion for former player events and attended Billy Wright’s funeral in the town in September, 1994. 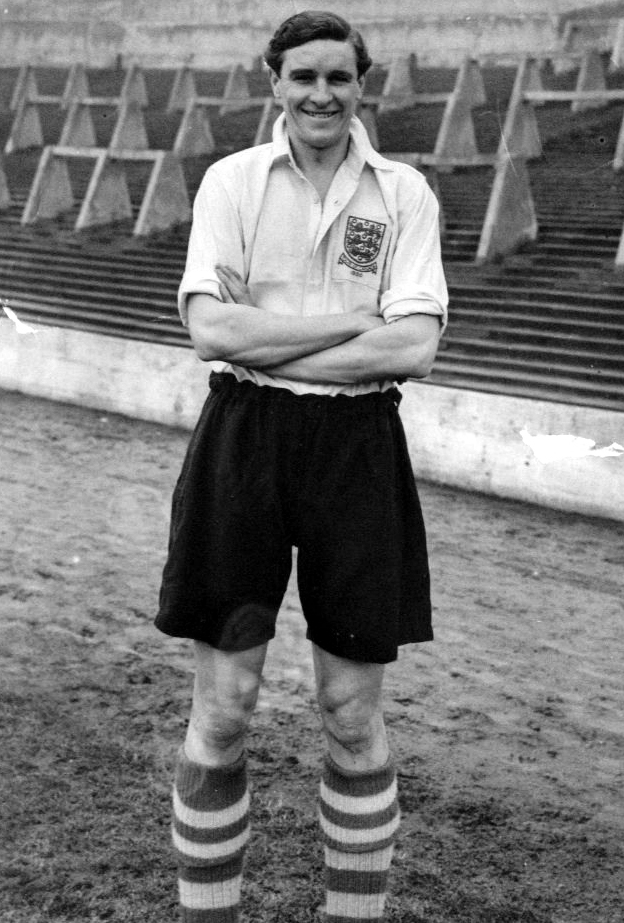 Proudly kitted out and ready to go touring with the FA in Canada in 1950. Non-flier Johnny Hancocks was on the same trip….relieved that they sailed on the Empress of Canada, rather than going by plane.

On a topical note, with Alan Shearer’s documentary aired two nights ago, the family sadly tell us that he suffered from the rapid onset of dementia in recent years.

Edward Thomas Russell died in the Cornish town of Lanivet and we wish to extend our condolences to all his family and friends.

The funeral is at Glynn Valley Crematorium, Bodmin, Cornwall, this coming Monday (November 20) at 3.30pm.