An Anniversary And Bold Plans For The Future 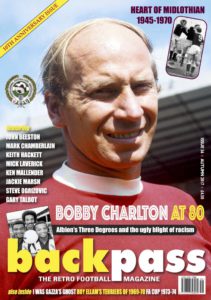 The cover to look for…..

Backpass, the wonderful football nostalgia magazine we are always happy to promote, has reached its tenth birthday.

We consider that any enthusiastic reader of this site would also find much to devour in the pages of a publication that has gained a new lease of life following some uncertainty and is now looking forward to the next couple of years.

The latest issue, number 56, has Bobby Charlton on the front and includes a flattering reference to another ex-England front-runner, Dennis Wilshaw – but not about his goal-scoring prowess with Wolves or for his country.

Instead, the 1950s Molineux star is credited by the former Stoke defender Jackie Marsh with converting him from being a forward to the right-back role in which he played several hundred top-flight matches. Marsh, possibly unbeknown to most of us at the time, also reveals in the long interview he gave Staffordshire-based Phil Shaw that he attended Derek Dougan’s funeral with his team-mate, Terry Conroy.

There are actually three references to The Doog in the 64 glossy pages, one of them as a nod to one of his and Gordon Taylor’s predecessors at the head of the old Players Union, Jimmy Guthrie. This tough individual skippered Portsmouth to their shock victory over Wolves in the 1939 FA Cup final and is pictured leaving Molineux complete with trilby and briefcase after a business meeting there on behalf of what he saw as frightened and exploited players.

One of Dougan’s Molineux colleagues, Alan Boswell, appears in Ivan Ponting’s excellent obituary section, his passing-away having been recorded by us in late August.

In David Instone’s three-page interview with Coventry veteran Steve Ogrizovic, there are also words of praise for Graham Turner and Bobby Gould for their part in his emergence as a top-flight keeper. 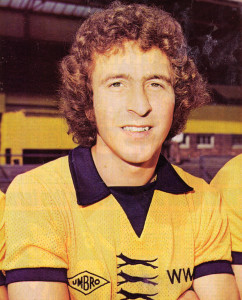 Backpass costs £4.50 and is best ordered by clicking on the icon on the right side of this page that shows John Richards’ picture.

Issue 57 is out shortly before Christmas and please may we suggest that a voucher or subscription to this outstanding publication might be a useful festive idea for anyone with football fans of a certain age in their family or friends group.