How Bertie Added The Promotion Bite

We at Wolves Heroes are always happy to assist in football’s reconnection game – and to pick up some of the pieces that might come our way as a result.

Earlier this season, we responded to the Brighton Argus after they asked for help in reaching Bertie Lutton and have since learned that he is due back in this country on a visit next summer.

In the piece they wrote about him, we read with interest of the role he played in helping get the Sussex-based Albion over the promotion line – although not the same one that they crossed with Chris Hughton in May.

Somewhat surprisingly, Lutton dropped two divisions after calling time on his Molineux career of 25 first-team games when he departed in September, 1971.

And those at the Goldstone Ground were happy the winger had made the move south as he played a significant part in securing the second and final promotion spot in Division Three at the expense of south coast rivals Bournemouth the following spring.

Brighton went up behind Aston Villa and were grateful to the Molineux-groomed Northern Ireland international for the part he played in their rise.

In a crucial Easter programme spent entirely on what might be regarded as the holiday trail, Brighton come from a goal down to beat Torquay 3-1 at the Goldstone Ground on Good Friday, then snatched a late 1-1 draw at Bournemouth the next day.

And Lutton, a £5,000 capture from Wolves, scored in both games, with the second of them particularly important.

Only five minutes remained when he reacted quickest in the penalty area and headed past his ex-Wolves colleague Fred Davies for the equaliser.

The point left Brighton well-placed to overhaul Bournemouth and they duly did so by three points despite the presence of the division’s 35-goal top scorer Ted McDougall at Dean Court.

Lutton’s work did not go unnoticed. Having scored only once at senior level for Wolves – in a 2-0 home win over Arsenal 48 years ago last week – he was sold to West Ham for a modest profit early in 1973. 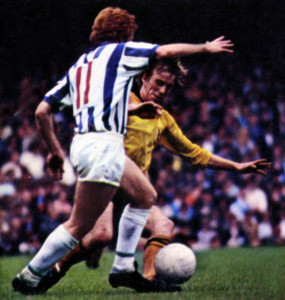 Bertie facing Huddersfield in his final senior start for Wolves.

But he suffered back problems while at Upton Park and managed only one goal in 13 appearances in a top-flight team.

He then squeezed in an unlikely stint at Horsham before answering a call from another former Wolves team-mate, Dave Maclaren, and going on to play Australian top-division football for many years.

He has remained Down Under ever since and, at 67, still works for Dulux in a supervisory role.