A Club On The Up 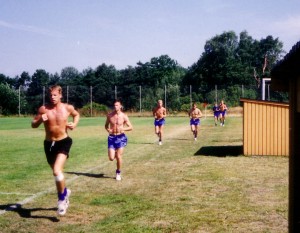 Steve Froggatt trails Mike Stowell in training at Wolves’ Swedish training base in 1994.

Friday, November 3: Good to see Kevin Foley and Steve Froggatt on radio summarising duty at Wolves’ win over Fulham tonight. Froggy is still working for BBC London – as well as in financial advice in his day job – while the right-back whose career came a bit later is now playing for Billericay in the seventh tier. Anyone assuming this is a huge drop should be aware, though, that the Essex non-Leaguers have also recruited Jamie O’Hara, Jermaine Pennant and Paul Konchesky and, not surprisingly, will top their table clearly if they win games in hand.

Sunday, November 12: Enjoyed helping Cheltenham fan Tim Deeks, who well remembers his club’s FA Cup visit to Molineux 30 years ago this month, with a little information about 1950s Wolves youngster Len Cooper. Tim found a mention of Len on this site after meeting him at the care home where he was visiting his own mother in the spa town. We told him that the forward didn’t make Wolves’ first team, at least in the League or FA Cup, but went on to make five appearances in Walsall’s senior side.

Wednesday, November 15: Was sorry to learn that Carol, the lovely Sporting Star copytaker with whom I spent many a Saturday afternoon locked in lengthy telephone conversation from Molineux and countless other points of the country, has been made redundant by the Express & Star as sports desk secretary. Our long-time partnership was in the days largely before the Internet, before press boxes had wifi facilities and before Wolves learned how to win promotion to the Premier League. Best wishes to her for the future.

Monday, November 20: Was pleased to hear that today’s funeral of Eddie Russell, whose recent passing-away in Cornwall we wrote about at length, had gone well. Nice to be informed, too, that the Wolves Former Players Association, who have always been full of such nice touches, had sent a wreath in memory of the man who played 35 games for the club in the late 1940s and early 1950s.

Wednesday, November 22: There is always a good smattering of former Leeds players around when their club visit Molineux and, for tonight’s game, we had the company of Noel Whelan, Neil Redfearn and, most notably, a third radio summariser in Eddie Gray. Wonder if he met up with John McAlle, who was interviewed on the pitch at half-time by Steve Daley? Noel was in no doubt that success is coming Wolves’ way this season.

Saturday, November 25: An early blast of winter did nothing to tarnish the enjoyment of another resounding Wolves win – preceded by a chat near the Stan Cullis statue with Mel Eves and Express & Star contributor John Lalley. These are dizzy goal-filled days at the top of the Championship. Long may they last!

Wednesday, November 29: Interesting – but also possibly premature – that there is talk of Wolves breaking some records this season. BBC Midlands Today, no less, referred in their sports round-up earlier this week to odds being quoted on Nuno’s side overhauling the 106 points won by Reading on their way to lifting the Championship title in 2005-06. On the subject of having a flutter on matches, our readers might like to play the best casino games online at Euro Palace . 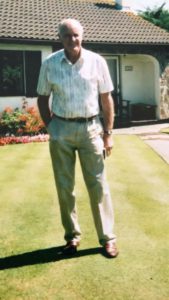 Thursday, November 30: Have been exchanging emails with Matt Forman to discover how the 1980s Molineux midfielder enjoyed his day at the big game on Saturday. It was his fourth trip to Wolverhampton in around a year and was equally memorable for his seven-year-old son, who reckoned the singing was better than at their local club, Manchester City.