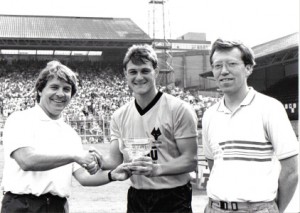 Steve Stoutt being presented with his London Wolves Player of the Year award in 1986-87.

For the second time in a few years, we find ourselves in the situation of throwing out our net in search of former Wolves Player of the Year Steve Stoutt.

We caught up with the 1980s defender in March, 2011 and spent an enlightening hour and a half with him more than two decades on from when he had been released from Molineux within 48 hours of the club’s Sherpa Van Trophy final triumph.

That meeting took place in an executive box at Huddersfield Town – a seat that has risen appreciably in value with the arrival of Premier League football at the Galpharm Stadium this year.

And it is a forthcoming book about the Terriers, written by northern journalist Rob Stewart, that has led us to be asked for contact details for a man who played 117 League and cup games during his three years in the West Midlands.

We are putting our faith in fellow Fourth Division title and SVT winner Micky Holmes to come up with the goods, although he tells us he might need to lean on Roger Eli for assistance.

The three were good mates while at Molineux, Stoutt sharing digs with both at different times at the Codsall home of Jack and Olive Carr.

Eli was freed by Graham Turner without kicking a ball for the club following the shock departure of Brian Little in October, 1986.

He has written his own life story, Thanks For The Memories, which came out in 2012. And if ever Stoutt follows suit, there is sure to be generous space given to his unusual career choice before and after his time with Wolves, Huddersfield and others – he worked for around 20 years as a milkman.

He still had a round in West Yorkshire when we met him six and a half years ago but there are suggestions he has since moved to Spain.

If any of our readers know where he can be reached, we would be grateful for their help – but only as long as Steve is happy to be contacted. Please hit the ‘contact’ button above right to send us an email. 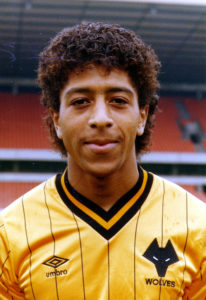 The Huddersfield publication is also set to include a section on Steve Kindon, the bustling forward who followed his spell at Wolves and two at Burnley with a prolific stay at the old Leeds Road.

Kindon and Stoutt were briefly club colleagues in the early 1980s, the former scoring at the rate of a goal every two games across his 80 appearances in blue and white.