Pitches: There’s Snow Comparison With The Past

Recalling When Choosing Studs Was A Whole Lot Harder 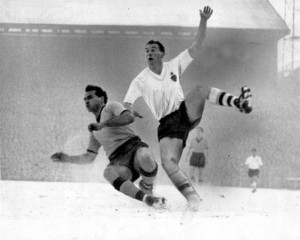 Wolves’ Eddie Stuart and Bolton’s Nat Lofthouse indulge in a skirmish in the Molineux snow – in short sleeves!

Few things in football have changed as much as the state of the pitches. Remember when you could guarantee a couple of matches per season being played on a carpet of snow?

In such circumstances, a plain orange ball would sometimes be sent for to boost the spectator experience, the touchlines would be painted in something other than white and piles of cleared snow might be visible just beyond the playing area.

Such wintry settings added new elements of risk, surprise and danger to games. They also helped ensure the long English season was a true test of different underfoot and overhead conditions and made for wonderful photos!

Alas, for those of a climatically nostalgic disposition, the widespread installation of under-soil heating now routinely leaves surfaces clear, soft and green in the top two divisions particular. It is a more even playing field in every sense.

The purists applaud the move and no-one should overlook the need for public safety which demands that in-doubt games should be given the go-ahead only if the surrounding roads and walk ways are not icy.

For those of a certain age, though, it is impossible not to look back on winter afternoons and nights in the notorious mud of Derby’s Baseball Ground or amid the unique difficulties elsewhere. Turf Moor could also be a little tacky to say the least and Maine Road and Upton Park are other venues that were rarely pristine beyond mid-autumn.

Those extreme occasions belong very much to the past and we have had some fun thinking back to some of the more wintry days and evenings in Wolves’ past.

With a nod to the heavy falls of the last week or two, we are thinking here only of games played in the snow – when there wasn’t a blade of green grass to be seen.

The home tie against Charlton during the 1955 FA Cup run springs to mind, as does the trip to Sunderland in the next round.

So, too, the matches in the same competition against Bolton in the late 1950s, Villa at neutral West Bromwich in 1965 and Huddersfield away in 1985. 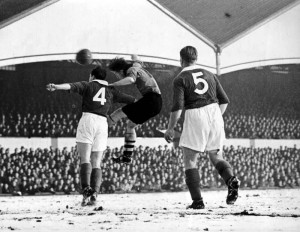 Don’t let this one drift! Wolves on the attack in a 1940s clash.

As for League games, how about that 1-0 home victory over Everton that Wolves dug out of the white stuff in the famously bitter winter of 1978-79? And the derby draw against Walsall on a Sunday morning in 1985-86 only just survived a blizzard-hit inspection of the Fellows Park pitch.

Such scenes seem to be firmly part of football’s past….even during the freeze of the last week, there has hardly been a flake of snow to be seen on a pitch anywhere the length and breadth of the country.