A Feast Of Wolves Reading

A Magazine Not To Be Missed 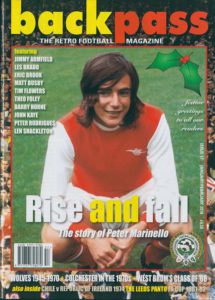 On the shop shelves from this weekend…….

A five-page feature on Wolves’ glory years and a three-page profile of Molineux discovery Tim Flowers make the latest issue of Backpass a highly attractive read for those of a gold and black persuasion.

The huge spread on the club arose because they were chosen as the latest subject of Ivan Ponting’s regular ‘Third Quarter’ feature, so informative biographies are given on nearly 30 Wanderers players from the 1945-70 era.

That broad sweep of the brush offers readers quality insights on men like Jesse Pye, Billy Crook, Gerry Harris and Phil Parkes as well as any number of bigger names from the period.

Ponting is one of football journalism’s most respected writers and perfectly captures the glory and joy of the trophy-gathering successes in these parts during the first decade and a half after the war.

He also homes in on the seasons that made up Wolves’ re-emergence in the late 1960s and early 1970s – a diversion that brings tributes to Peter Knowles, Mike Bailey, Derek Dougan, Frank Munro and others.

The extensive spotlight on Molineux contains mini pieces on three epic games – the 1949 FA Cup victory over Leicester, the famous friendly against Honved and the title-clinching home League win over Preston in 1958 – and manager Stan Cullis.

Nine stirring photographs also illustrate Ponting’s text and underline that pages 22-26 of issue 57 really should not be missed by Wolves supporters.

David Harrison, the Express & Star’s Molineux man for several dramatic early 1980s seasons, is the author of the Flowers piece, one page of which is devoted to how Wolves groomed him after picking him up in local football in Coventry.

There’s a photo of him signing at the club in the presence of Tommy Docherty and also a revelation about what the colourful manager said to the nervous youngster by way of preparation for his debut against Sheffield United.

Any supporters who assume Wolves cornered the market for ramshackle facilities in the mid-1980s may be surprised at Flowers’ disclosures about how he subsequently found life at Blackburn before the big spending of Jack Walker kicked in.

Improbably, the League Championship title came to rest at Ewood Park in the mid-1990s but the highly talented keeper recalls with affection the rustic times along the way, notably with training and changing facilities.

Another of the photos used with this feature is of Flowers in America in an England senior squad also containing Andy Sinton and Paul Ince.

Prospective buyers should click on the Backpass icon on the right side of this page for details of how to purchase issue 57, which has former Arsenal forward Peter Marinello on its front cover.