Gerry O’Hara has included a tour of Australia on his ‘bucket list’ – but it has nothing to do with the current Ashes series or any other one.

The former Wolves midfielder has no idea when he will finish work but is already looking ahead to when the freedom from employment constraints leave he and his wife Dee with some quality travelling time and able to lap up plenty of sun.

“We would love to have a good look at Australia and have another trip to drive the length of the California coast,” he said.

“We went to Oz in 1986 after some friends of ours set up home an hour or so from Sydney. We saw Melbourne as well but I guess the whole idea of people going on holiday there has taken off with the Barmy Army travelling in big numbers, as they have this winter.

“Not that cricket would be part of it for me. I am not a fan.”

O’Hara, back at Molineux at last Saturday’s win over Ipswich for the reunion of more than a dozen 1960s and 1970s Wolves players, has a local nephew, Ben Webb, who competes in WWE wrestling under the name Trent Seven and recently fought in Melbourne.

The 61-year-old very much has the travel bug, although the fact that his wife runs the Serendipity shop in Codsall is another reason for their plans having to be open-ended.

“We have talked about travelling around in a Campervan and very much like the idea of driving through California,” he said. “We have already arranged to meet Chris Dangerfield when we are on the west coast. He was a good mate of mine at Wolves and unlucky not to make it really because he was a good player. 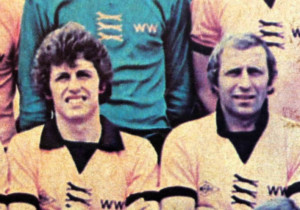 And with skipper Mike Bailey on a 1976 team photo.

“We like the sunshine and also favour the idea of spending a few months a year in Tenerife. They are the plans anyway – for whenever that might be.”

O’Hara was born in the very shadow of Molineux, near where the Asda superstore stands, and might conceivably have travelled abroad to play after a Wolves career that was limited to 11 first-team appearances.

During his long stint in non-League football, a football friend once encouraged him to consider signing for a club in Hong Kong but the idea did not gather momentum.