Gerry Farrell waited more than 40 years to catch up with the mates he left behind in a hurry when released from Molineux as a heartbroken teenager – but vows he will see them again within months.

The Liverpudlian is still digesting the ‘surreal’ experience of being back at the club and in the company of old friends when he attended Wolves’ victory against Ipswich just before Christmas.

And he is looking forward to a further meeting with many of them over the summer months after being welcomed back into the fold so warmly.

“It was just so wonderful seeing all those lads again,” he said. “It was the most fantastic experience but very surreal.

“I caught the train down there and have to confess that I didn’t recognise Geoff Palmer and had to wait for him to introduce himself when he came to collect me from the Mount Hotel.

“The stadium has changed beyond all comprehension, of course, but it was strange seeing all these faces I once knew so well…..Lofty, Phil Nicholls, John Richards, who was one of the easier ones to spot. Gerry Taylor caught me out but what a gentleman he still is!”

While post-football life has proved successful for the 65-year-old one-time Wolves youth team captain, it was the prominence of a former team-mate that led to his mid-season return to the West Midlands.

Farrell, who didn’t progress anywhere near the first teams sent out by Ronnie Allen and then Bill McGarry in the late 1960s and early 1970s, is sufficiently well-established as an estate agent in the Morecambe area as to have agreed to take a table when a football club in nearby Lancaster were selling places for a dinner.

And who should be providing the entertainment but Steve Daley?

“I saw on the tickets that he was appearing and remembered what a funny guy he was from sharing a dressing room with him,” Gerry added. “Each time he went home to Barnsley, he came back with a story that had us in stitches.

“Steve was keen for me to come back now to one of these get-togethers and knew I had stayed in touch with another of our old pals, Paul Walker, and played golf with he and Mike O’Grady in Yorkshire.

“There is a plan for us all to come down together soon. I am still busy up here through work and have to keep an eye on my mum, who is about to turn 93, but I have been told about the golf days the lads have, so they are something to bear in mind.

“I literally hadn’t seen many of these guys in several decades and would love to have seen John McAlle, who was away the weekend I was down. But we picked up as though it had only been a year since we met – that’s the language of football for you!

“When you are released by a club at the end of a season, as I was by Wolves, you just quietly go. I remember playing in a 0-0 draw at Nottingham Forest in the last Central League game and then leaving. I was heartbroken and didn’t feel like hanging around saying goodbyes.

“Peter Eastoe is one I did see in my later football career. He was with Everton – the club I support and who I occasionally go to watch with my son and grandson – and I was playing for Morecambe. The coaches we were travelling on pulled one after another on to a service station car park and we had an embrace. 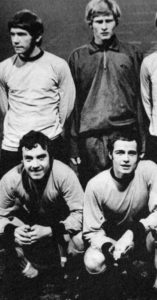 “I was in digs with him in Wednesbury and we got on well. We were good mates.

“But I had so much to catch up on with those I did see. I didn’t have a drink in the afternoon because I wanted to take it all in and enjoy the game.

“Then I went off to Lofty’s cricket club with Phil Nicholls and him and took advantage of the fact I was on the train home.”