A Treasured Trip To The Coast To See Cup Winner 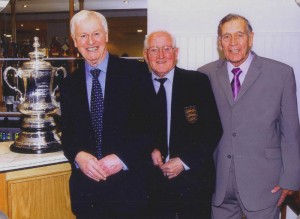 Nigel Sims (right) with fellow Cup winners at Villa, Peter McParland (left and also once of Wolves) and Jackie Sewell.

With the funeral of Nigel Sims taking place in South Wales a week on Monday, we asked our valued contributor Charles Bamforth for his memories of the time he visited the former Wolves reserve keeper for an extended interview more than a quarter of a century ago.

At the time, Charles was compiling his In Keeping With The Wolves book – a true labour of love as it brought him into direct personal contact with many of his heroes between the posts at Molineux.

And the chapter he produced on the man who served as a long-time deputy to Bert Williams told us so much we didn’t know, such as how he shared digs run by a Mrs Llowarch in Vincent Street near Molineux with Johnny Walker, Jack Short, Ken Whitfield and the less-known Ian Clark.

There was also the time Stan Cullis reprimanded him for having his arm innocently around a girl he was walking home.

Our writer recalls Sims greeting him to his home on the delightful Gower Coast in 1990, his host still looking the part clad in shorts, although he took the occasional drag on a cigarette.

“I remember the day well,” Charles says. “I was living at the time near Chester and had a business meeting in Surrey. I drove down to that and then made my way along the M4 into Wales.

“Nigel lived in a cosy bungalow close to the sea near Swansea. I remember thinking how fit, bronzed and strapping he looked, handsome and chirpy.

“He regaled me with tale after tale about his illustrious career – including his frustration at being a perennial understudy at Molineux. I was particularly fascinated to hear about his boyhood in Coton-in-the-Elms, which is close by where I had once lived in Barton-under-Needwood.

“There were lots of laughs. It was a privilege to meet him and my mind was certainly a whirr as I embarked on the journey home, which, for some reason, I elected to make a winding one through the heart of Wales rather than on the motorways.

“It was a long day – but special for one obvious reason; meeting Nigel Sims.” 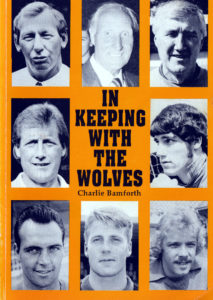 An excellent £7.50 worth more than a quarter of a century ago.

The Sims chapter of In Keeping With The Wolves also revealed a little exasperation, in as much as the deputy grew tired of reserve-team football and was once or twice led to believe Bert Williams was going to retire before he actually did so.

Compared with his 39 League and Cup matches while at Molineux, the man from the Staffordshire-Derbyshire border was hugely fulfilled in his subsequent years across the patch and reckons Villa’s 2-1 Wembley victory over Manchester United in 1957, in which he starred, was the last time the Queen and Duke of Edinburgh presented the FA Cup.

Villa manager Eric Houghton teased Sims about being recognised by The Queen when they saw her at Ascot races soon afterwards.