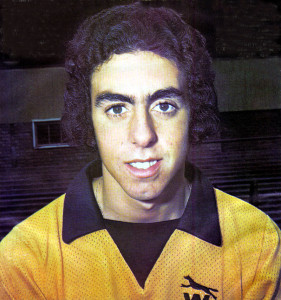 Geoff Palmer….among those to pay tribute.

Saturday, January 6: Made a point of seeking out the members of John Hendley’s family who were present by special invitation at Wolves’ home game against Swansea this afternoon. Also in Sir Jack’s for a hastily arranged buffet for the bereaved were ex-work colleagues and playing and management friends including Gerry Taylor, John McAlle, Geoff Palmer, Mel Eves, Phil Parkes, Colin Brazier, Steve Daley, Jody Craddock, Kevin Foley and Dave Jones. Fittingly, the match programme contained many tributes to its long-time editor following his passing-away on New Year’s Day and there were other pre-match acknowledgements of the huge part Foz played in so many Molineux lives.

Thursday, January 11: Took Gerry O’Hara’s advice and chose Goodwin’s at Tettenhall (formerly The Rock) as a rendezvous point for the coffee meeting John Richards and I arranged for this afternoon. More in the coming weeks about the main reason for our get-together but it was also an opportunity for an envious look over the old programmes and other keepsakes he spoke about on this site very recently.

Tuesday, January 16: Nice to receive some feedback to the feature we posted two days ago, especially as it was from a 1970s Wolves player. John Black emailed us from his home in the north of Scotland to say: “I enjoyed the article about Mrs Eagle’s flock. I remember  those days well and liked Barry Powell as a guy as well as rating him as a smashing player with a fantastic engine. Willie (Carr) and Hibby would have appreciated  his energy beside them. Barry and Withie (Peter Withe) were miles ahead of everyone when it came to stamina training in those long runs on Cannock Chase near Brocton or on the laps against the clock on the track at Molineux. There’s a story behind every article you do – thanks for bringing back such great memories.”

Saturday, January 20: A nasty reminder of the hazards that still lie in wait in this immensely satisfying Molineux season – Wolves were well beaten by Nottingham Forest this afternoon. It was interesting to sit next to Mel Eves and receive a player’s insight into what went wrong for a change. He was not on Radio WM duty, so I enjoyed having him as my personal summariser of the action, even if neither of us enjoyed witnessing the side’s first home defeat since August. It’s worth recording that Nuno’s men had won ten and drawn three of their Molineux fixtures since Cardiff won here.

Monday, January 22: Always enjoy a catch-up with Chris Evans and this morning’s two-hour chat at the former academy chief’s new place on Wolverhampton’s outskirts was illuminating as usual. Chris has turned down at least one offer to return to the game but is still attending many matches, including a good number at Wolves, to keep him sharp for when the call comes. I also checked a few facts with him for my forthcoming book – one detailing my 30-plus years in the Molineux press box.

Wednesday, January 24: How illuminating it can be – in the interests of learning about past Wolves players – to flick through publications dedicated to other clubs. Glancing through the Crystal Palace version in the outstanding When Football Was Football series, I learned the following: Geoff Thomas was named by Palace fans in their Centenary XI; former Selhurst Park favourite Johnny ‘Budgie’ Byrne, later to win 11 England caps, was linked with a move to Molineux in October, 1959, some three years before joining West Ham instead; Terry Wharton was a Palace team-mate of Bobby Tambling and Alan Birchenall; and Dougie Freedman, having cost £800,000 from Barnet, became only the seventh man in history to score 100 goals for the South London club.

Tuesday, January 30: Barely a dry eye in the house at a wonderfully moving memorial service in honour of Cyrille Regis at The Hawthorns this morning. Wolves managing director Laurie Dalrymple was among the estimated 4,500 in attendance but there were any number of former Wanderers players there as well, including Keith Downing, Mark Burke, Don Goodman, George Berry, Bob Hazell, Alistair Robertson, Steve Bull, Tony Daley, Mel Eves, Dean Sturridge and Jim Barron, plus the club’s one-time coach and caretaker manager Brian Little. My eye was also caught by national figures such as John Barnes and Johnny Giles, not to mention many of Coventry’s 1987 FA Cup winning side of which the departed and much-mourned centre-forward was a key and popular part. 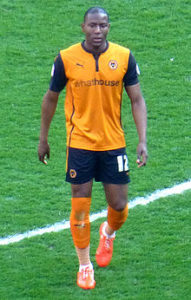 Benik Afobe – back to Molineux.

Wednesday, January 31: Come in number 983 – that’s the number in our Afobe to Zyro list of the former, a striker who has rejoined Wolves on loan from Bournemouth. Amazingly, more than 40 men have made League debuts for the club since he did only three years ago this month.