“We have a capacity crowd here and I suspect there will be a lot of football analogies today,” the Reverend Prebendary David Wright told us shortly before midday at Bushbury Crematorium. “It is, after all, a game of two halves.”

We were to be reminded, especially in the memorial service that quickly followed at St Peter’s Collegiate Church, how much more there was to John Hendley than his love for Wolverhampton Wanderers. But, so close to his heart, it really is the only place to start.

An unbroken run of 1,000-plus consecutive League and cup matches tells part of the story. His determination to keep working at full throttle well past his 67th birthday further underlines the bond that extended between he and his home-town club.

This was a send-off to rank with Wolverhampton’s finest. At the venue at which we had said our farewells to Cullis, Wright, Broadbent, Williams, Hayward and, a year ago to the day, Rachael Heyhoe Flint, it was standing room only for later-comers. And this for a guy from the back offices rather than where the paying masses assemble.

You could name more than two talented teams out of the players present and that is not to include the many academy lads who helped form a moving and moved gathering of close to 100 as the cortege left from behind the Billy Wright Statue.

The turn-out was swelled further by Danny Batth, Harry Burgoyne, managing director Laurie Dalrymple, several dozen current and former staff members, media friends, pals and colleagues from his other loves and of course Wolves supporters. As a lovely unexpected extra touch, we were joined by Richard Walker from the Watford media office, who brought a wreath representing 12 clubs from around the country.

There were messages of sympathy from Ipswich, Norwich, QPR, Sheffield United, Middlesbrough, Preston, Birmingham and others, one from Karl Henry on behalf of the dressing room from the Mick McCarthy era, plus supporter and boardroom representation from Albion.

“Friend, legend, top man, gentleman, stalwart are among the words that have been used to describe him,” the Rev Wright added. “We are too polite to add ‘grumpy’ to that list and it’s true we could sometimes find him infuriating. But we loved him anyway.”

The long-time club historian and editor of an award-winning programme connected so easily with others. Technology left him behind in some ways but the videos he used to produce with Mike Stowell are legendary among Travel Club members and he had a knack of effortlessly clicking with teenage hopefuls and the newer recruits to Wolves’ media department. He was game for a laugh, often at his own expense; quickly accepted and liked by all ages.

Richard Skirrow, whose 20-year stint as secretary up to last March covered all of Foz’s full-time employment at the club and some ‘strong association’ in other roles prior to that, went a stage further in reminding us of the personality we are so sad to have lost.

“I made a few leaving-presentation speeches in his presence and he would always say: ‘Not you again.’ Well, yes, here I am once more today…..and without many time constraints.

“It’s a cliché but every club should have a John Hendley. He could be a grumpy so and so in the morning, with his chin on the floor. But he would have people in the offices in stitches in the afternoon.

“He was appointed by Lorraine Hennessy in 1999 and he thought the world of her, his mentor, and it was mutual. When it came to the matter of flags being flown at half-mast or having pre-match tributes, he kept us on track. And he was unwavering in his support for managers….he was a reliever of tension, not a creator of it.”

We have witnessed before Skirrow’s expertise in delivering a perceptive comment to capture the moment and he spoke of a dear friend’s deep-rooted Wulfrunian ways……previous employment at New Cross Hospital and Manders, dog walks in Bantock Park, running the Wolverhampton Marathon, even playing at Molineux – and missing an open goal from Terry Connor’s cross. 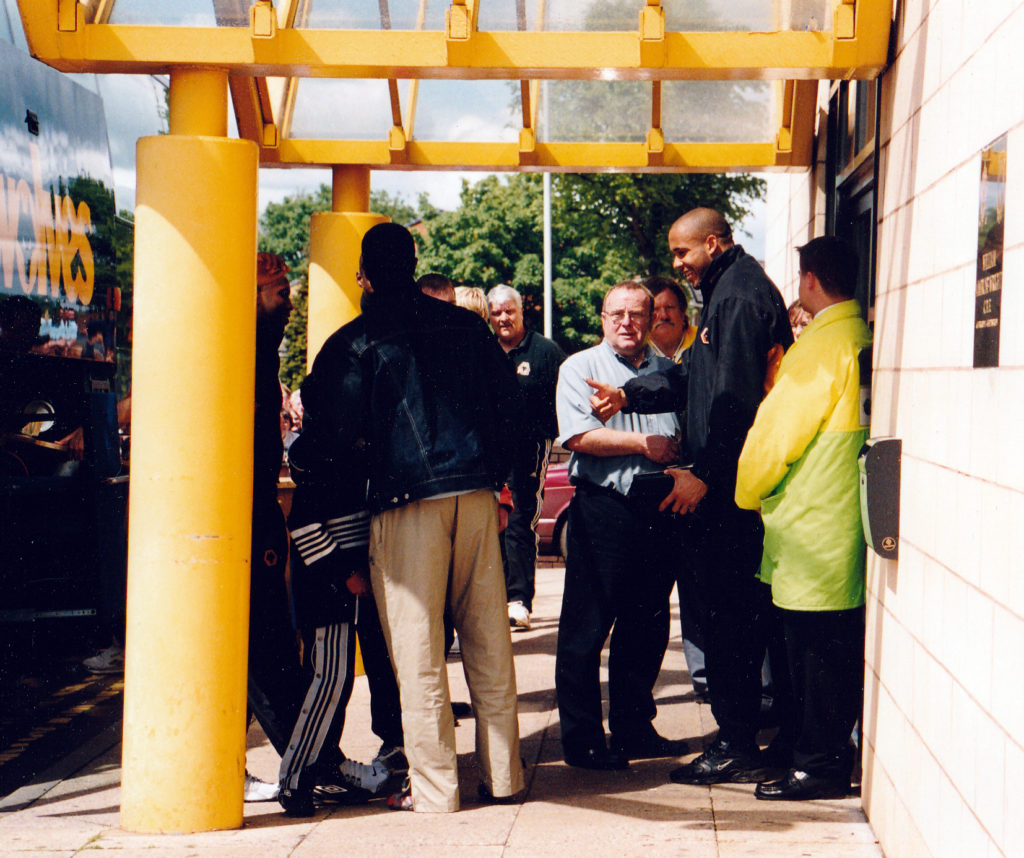 Foz wishing Matt Murray well prior to departure to the 2003 play-off final.

Then there were the dislikes; Sky Sports’ habit of switching kick-off times, Manchester United fans from anywhere south of Knutsford, cheese and a certain rival club whose team photo he had wrapped around his waste bin. He knew how to keep a bee in his bonnet. Not that the latter oft-heard loathing prevented him having good enough mates at The Hawthorns as to travel occasionally with them to ensure he remained in the 92 Club.

It was clear the former secretary, who was also a social friend of his from trips to England cricket games and concert visits largely dominated by Paul Simon, didn’t find this address easy going. Foz’s sister, Julie, neither. She kicked off the outstanding quartet of reflections that also brought John Richards and Wolves speedway’s Mark Sawbridge to the fore in trying circumstances.

“I have to apologise for being only A John Richards and not THE John Richards,” the folk singer said. “And for the fact I am an Albion fan.”

Clearly, the duo nevertheless had great fun on the circuit and, as someone who paid to attend the 1999 Molineux carol concert and saw Foz give a solo performance on stage in front of the Jack Harris Stand, I wasn’t alone yesterday in loving the ‘This Road That We Are On’ song played during the service and at the end. He wrote and sung it. Behind the unique humour, there was multi-faceted talent.

We spoke on here soon after Foz’s passing-away at the start of the year about his love of memorabilia, his yearning for completism (he had to have a full set of something), even as remote as American comics. One other newly-aired foible was his idea of including the sound of a steam train on a sharp incline as part of the in-journey entertainment for passengers en route to away games. 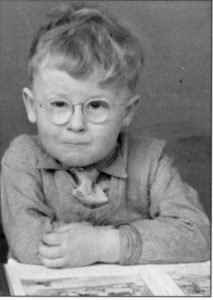 A picture of innocence and possible mischief before he knew anything about girls, Hugh McIlmoyle and Peter Knowles.

“He hated conflict and always wanted to end a situation with a joke,” Julie said. “Hold on to your special memories because he would never have wanted you to be sad.”

She and other grieving family members will be comforted by the huge impact he had on lives around here and the fact he led his just as he wanted to right to the end.