England Pride For The Simkins 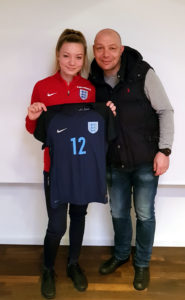 Darren Simkin is beaming with pride after flying to the continent to see his daughter make her international debut in one of England football’s age group teams.

The former Molineux defender was in Switzerland to see 14-year-old Lily to play parts of two games that were the highlight of a week-long training camp for a 30-strong squad.

“She has done something I didn’t manage to achieve,” Darren said today. “I never represented my country and found watching it quite emotional, to be honest, especially seeing her during the national anthems.

“She’s a defender, tall like me, and plays at right-back or centre-half. But the women’s game is much more technical than the one I played, so we’re not that alike in styles.

“It was an England under-15 squad and they were facing the Swiss under-16s at Schaffhausen, almost right on the German border. They won both matches, 2-0 and 3-1, and Lily played the second half of the first game and the last 20 minutes of the second one, as the idea was to give all the girls the same sort of game time.”

The games were streamed on the Internet but Simkin Snr, who played 15 first-team games for Wolves in the early and mid-1990s, travelled in order to gain the full parental experience.

“I went with my brother, who has a son in the Albion academy and therefore sees plenty of Jamie Smith,” he added. “Lily plays for Blues, usually at Wast Hills or Tally Ho! for home games, and we are at Solihull Moors right now watching them in a women’s FA Cup game.

“She has been told there is a national camp next month and another trip in March, this time to Belgium. Those to get-togethers are something to aim for and she is also delighted at being told she is going to be the sixth inductee into the hall of fame at Great Wyrley, where she used to play and where she is at school.” 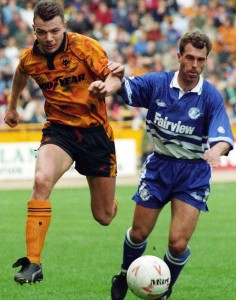 Simkin in action against Millwall in May, 1993.

Darren is reluctantly having to scale down in his appearances in the Wolves all-stars team, of whom he has been an excellent supporter over the years.

“Unfortunately, I have been finding that it was taking me a couple of weeks to be able to walk properly again. The medical people tell me that I have the knees of an old man.”