Favourites On The Molineux Menu 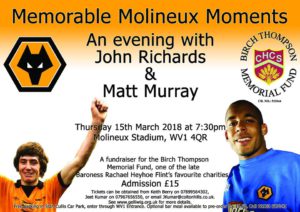 A ticket worth having.

Matt Murray and John Richards step back into the limelight this month for the first of two charity fund-raisers that were close to the heart of the Baroness Rachael Heyhoe Flint.

The heroes from opposite ends of the pitch in decades past are appearing side by side at a Memorable Molineux Moments fans’ get-together a fortnight tonight.

The event is in aid of the Birch Thompson Memorial Fund and Gelliwig, for whom Rachael provided beds via a 2008 grant from Wolves Aid – and two minibuses through her work with the Lady Taverners close to the cricket world.

Richards, the club’s 194-goal former record scorer and also their 1997-2000 managing director,  and the ever-popular Murray, now a popular Sky Sports pundit as well as part of Barnsley’s backroom team, will be present to answer questions on stage in the Stan Cullis Stand on Thursday, March 15.

Among the attractions is an auction in which a pair of signed Carl Ikeme gloves and the use of a Steve Bull Stand executive box for the April 3 visit of Hull are up for grabs.

Admission to the evening costs £15, with tickets available via jkumar@coltonhills.co.uk – or via the www.gelliwig.org website. Bar meals can be ordered in advance for £8.50 by contacting (01902) 687042.

Rachael, who passed away in January last year, was a staunch supporter of the Birch Thompson Memorial Fund, which maintains an outdoor residential activities centre, Gelliwig in Porthmadog, that is utilised by West Midlands youngsters.

The long-time club president has already been honoured by Wolves through an award that is presented in her name at the annual end-of-season dinner and with the renaming of the Paycare Lounge for disabled supporters in the Stan Cullis Stand.

In addition to those tributes, the annual match-day collection for POWER PLEAS, the charity she proudly helped to provide wheelchairs for youngsters, now carries the name of Rachael’s Day.

Tettenhall Rotary Club have organised this money-raising effort since 1995 but it was renamed early last year in agreement with Wolves’ officials and members of her family. BBC broadcaster and ITV presenter Jacqui Oatley is a POWER PLEAS patron.

The second Rachael’s Day will take place alongside the POWER PLEAS collection for the home fixture against Hull on Easter Tuesday, April 3.

Keith Berry, who is involved in the organisation of both charities, was indebted to Rachael’s support and was the first recipient of the Rachael Heyhoe Flint Award last year. 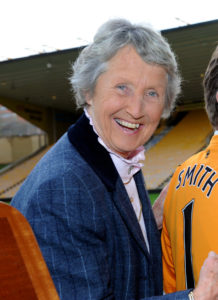 Rachael Heyhoe Flint as everyone at Wolves will remember her…..being busy working for others.

“She was such a passionate supporter of both POWER PLEAS and the Birch Thompson Memorial Fund,” he said. “She worked tirelessly with POWER PLEAS and Tettenhall Rotary Club on our collection, and the generosity of Wolves supporters over the last 22 years has made such a difference to the lives of so many young people from the local community.

“As well as our gratitude to the Wolves supporters, we are hugely appreciative that Matt and John have agreed to give their time for another of Rachael’s favourite charities with the night at Molineux.

“It would be great to see as many fans as possible come along to listen to Matt and John’s memories of their time at Wolves, and support the charity at the same time.”