Gray Day Was Read About In Black And White 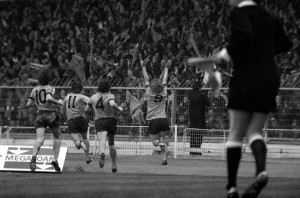 Goalscorer Andy Gray celebrates at Wembley in 1980, with no 10 John Richards, Peter Daniel and Mel Eves in pursuit.

In the week that we have raised a glass to the 38th anniversary of Andy Gray’s tap-in League Cup final winner against Nottingham Forest, how about this for a little insight into how his Molineux stay came to a close?

Wolves were famously on the slippery slope when the brave-heart striker was sold to Everton in the late autumn of 1983.

But what is not as well known is how the news of his cut-price sale to Goodison Park broke in the public domain, in particular on Merseyside in the Liverpool Post & Echo.

The company’s well-respected correspondent, Ken Rogers, believed he was in for a quiet morning until taking a call from a fan who was asking if Gray was about to join the Toffees.

When he asked the caller why he was mentioning it, he was told: “Because I have just seen him buying a paper in the newsagent across the road from Goodison.”

And that is how, followed by a check with Everton’s top brass, the Post & Echo informed their readers that the Scottish international was on the verge of signing on their patch.

As a newcomer on the Express & Star sports desk, I was despatched to cover Gray’s debut for the Blues. By coincidence, that was also against Forest and again he scored the only goal in a 1-0 home victory.

Rumours persist in these parts of how convincingly the striker passed his medical when joining Wolves from Aston Villa in 1979 and becoming English football’s costliest player.

It seems there were also some question parts when he was checked over by Everton’s doctors nearly four years later and Rogers had a nice turn of phrase when referring to the closing-out of the deal in his autobiography.

He wrote: I don’t know if Andy came through his Goodison medical with flying colours but I can just imagine Howard Kendall looking at the doctor and saying: ‘Can he reach down and pull his boots on?’ Just do it!” 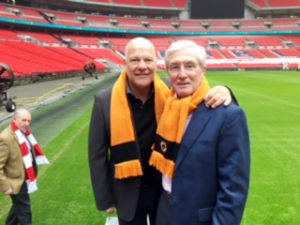 Andy Gray and John Richards back at Wembley in recent years.

Gray repeated the Wembley impact he made 38 years ago yesterday by netting for Everton in their FA Cup final success over Graham Taylor’s Watford in 1984.

He was a favourite on Merseyside, Rogers describing him as ‘infectious’ and ‘effective way beyond his 22 goals in 68 games.’

“He was also a great player to interview,” he added. “He was full of opinions and wrote a column in the Echo until he had to ring me to say he had been offered a column in one of the national papers.”