A Claim To A Place In History

Ross On His Unique Twin Careers 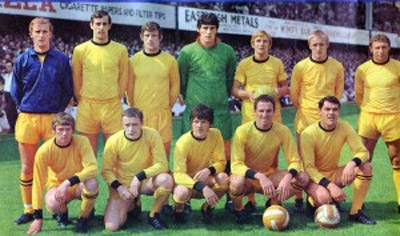 Stewart Ross lines up as substitute with Wolves at Southampton in 1968.

Stewart Ross has shared more details with Wolves Heroes about the extraordinary split career he had in two different parts of Waterloo Road – and asked whether he was the last part-timer to play in English top-flight football.

Ross famously made his debut in front of a near-54,000 crowd against Manchester United 50 seasons ago while working as an accountant.

He made two further senior appearances in Ronnie Allen’s side over the following months – not bad for someone who received a maximum of £25 a week from the club and was forced to train alone at night around his 9-5 job.

“Ronnie used the phrase ‘out of sight, out of mind’ because he hardly ever saw me,” the 72-year-old told us today. “I don’t ever recall him sitting me down in his office for a chat and asking fully about my situation.

“He had some excellent centre-halves around anyway like Dave Woodfield, John Holsgrove and Graham Hawkins, with Frank Munro coming down from Scotland in our first season back in the First Division.

“It would have been very hard for me to get in the first team but I ploughed a lone furrow and can’t think of anyone who has played in the First Division or Premier League since on the part-time basis that I did. My case was very unusual.”

Having written this piece (www.wolvesheroes.com/2008/12/28/a-debut-like-no-other) about Stewart almost ten years ago, we were prompted to call him again after recently stumbling across some old quotes from him on a visit we made to the city archive in the old Molineux Hotel.

The article referred to how he had moved from Surrey to Wolverhampton as a youngster with his family in 1958 and attended the town’s grammar school. He was once chosen for the England grammar schools under-18 squad to face Scotland, only to be told he was 11 days too old.

“I thought I had done quite well in all the trials and was in with a good chance of playing,” he was quoted as saying. “But I was suddenly told I was too old and felt quite sick about it all.

“I had also played for Staffordshire Grammar Schools and captained Wolverhampton Grammar Schools six-a-side team when we won the Public Schools Championships at Brentwood in Essex.

“I used to train with Wolves in school holidays and they wanted to sign me when I was 15 and Stan Cullis was still manager. But my father didn’t want that while I was still in full-time education, so that was the end of that. 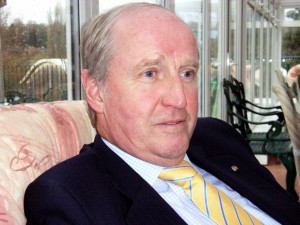 Stewart in more recent years at the squash and tennis court at Newbridge.

“They wanted me again at 17 and I went and played a few trial matches while I was doing A levels, including one as a centre-forward at Castlecroft. I didn’t progress much because I thought I would go to university but I went straight into accountancy in the end and rang Wolves to tell them of my situation.

“They were still interested and I did most of my training with Jack Dowen – some of it solo in the evenings or with amateurs and schoolboys.”

In the article of nearly 50 years ago, Codsall-based Ross, who worked for years just up the road from Molineux, said: “It’s very hard combining my football with my full-time job and there are times when I don’t feel like training after a day in the office. But once you get out there, you can work the mental strain off.”